Government to withhold the drug from you women pending more studies

•The drug is not recommended for women aged 15-49 because it can deform the spines of unborn babies.

•But to Virginia, life has not been easy as the drug she is currently using has caused her more harm than good. 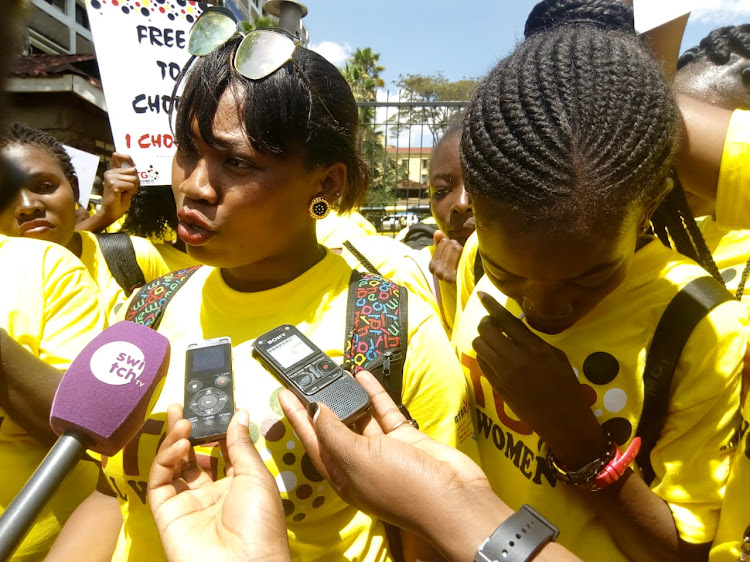 Young women living with HIV during a demonstration outside Afya House on April 10, 2019
Image: MAGDALINE SAYA

Young women living with HIV are now demanding access to and use of Dolutegravir (DTG) drug.

Dolutegravir is the preferred first-line ARV in Kenya, but not recommended for women aged 15-49 because it can deform the spines of unborn babies.

But to Virginia, life has not been easy as the drug she is currently using has caused her more harm than good.

“The one I use I take it only once at night, but it makes me dizzy and sleepy for a very long time that even going about my usual business is a problem. It also causes rushes and itching on the body,” she said.

Caroline, from Kenya Sex Workers Alliance, dismissed reports that the drug is harmful, saying the DTG is more powerful than others.

“We call it wonder drug because it performs wonders. It doesn’t have a lot of side effects and it is good because it makes the viral load to go down faster,” Caroline said.

They said women have a right to choose what she wants. They said not all young women are interested in having kids.

“The women are told if they use DTG they will give birth to deformed babies. Why not give them information on the good side of the drug because we all know it has its advantages,” Chris, who came out in solidarity with the women said.

They said they don’t want to be coerced to take a particular medication and should not be denied access to DTG irrespective of their child bearing potential.

“We are disappointment at our lack of involvement in the decision making in regards to our treatment access,” Caroline said.

The National Aids Control Council Executive Director Nduku Kilonzo while addressing them outside Afya House yesterday said health care workers will be required to give them the right information about the various drugs and left to decide on what drug they want.

“We will be having frequent meetings to discuss some of these issues because it is only through such forums that we will be able to know what challenges you are going through and look for alternative solutions,” Kilonzo said.

Kenya had opted for DTG from the time the generic version became available.

The concern only came up after a study in Botswana detected a significantly higher rate of neural tube defects in infants of mothers who had been taking Dolutegravir at the time of conception, compared to other antiretroviral therapy regimens.

A study supported by the WHO is underway in several countries, including Kenya, to determine the extent of the risk to unborn babies.

Post a comment
WATCH: The latest videos from the Star
by MAGDALINE SAYA REPORTER
Health
10 April 2019 - 08:49
Read The E-Paper