Row over nominated MCAs as assemblies to meet, elect speakers

• Assemblies to hold first sessions on Wednesday as fighting intensifies over nominees in UDA dominates.

•People with disabilities raised an uproar after most were left out of lists of possible nominees. 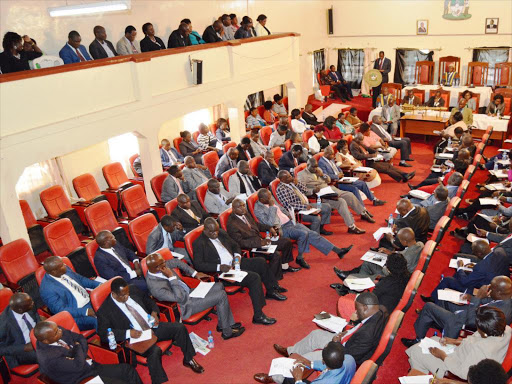 North Rift assemblies will convene for the first time on Wednesday following new MCAs' orientation and gazettement of nominated legislators.

The assemblies are dominated by UDA party of President William Ruto but UDA members with disability are scarcely considered as nominees, even though many are skilled and work hard for the party.

Their representative, Paul Chesut, said they would use all means possible to ensure they are included as provided under the law.

“We will go to court and battle for our rights because we know the Constitution protects our rights as people with disabilities," Chesut said.

A group of political leaders also complained that most nominees were relatives, cromies or lovers, yet genuine, hardworking party members had been left out.

As the MCAs convene, they will first be sworn in, followed by election of speakers, majority leaders, whips and formation of departmental committees.

“As MCAs elect we are ready to start businesses as soon as we are sworn in," MCA-elect for Langa Francis Munya said. He will be serving his third third term.

Most assemblies in the region are dominated by UDA that won the majority of the seats. However Trans Nzoia and Turkana have MCAs from DAP and ODM parties, among others.

Clerks for the assemblies have already advertised for the position of speaker. The applications will be shortlisted, then MCAs will vote.

Lobbying has intensified for the jobs o assembly speakers and county executives in the North Rift.

Top lawyers and former MPs are among those jostling for county jobs as MCAs prepare for their initial meetings where the first task will be to elect speakers and deputies.

The assemblies re dominated by UDA MCAs just as governors for most counties are from the wheelbarrow party.

It’s not clear if Kiptoo will defend the position but sources said UDA was favouring Kogo.

“The elected MCAs are mature people who will elect their own leaders when that the comes soon,” UDA regional  coordinator Paul Kiprop said.

Former secretary general of the County Assemblies Forum Kipkirui Chepkwony is also mentioned as interested in the speaker job but he could not be reached on his phone to confirm that.

Governors elect in the region are also searching for suitable names for the county executive jobs.

As President Ruto is a resident of the region, some poll losers seeking his assistance, and that of other county UDA top brass, to get the county jobs.

Korir who volunteered to work at the front office desk was nominated to Baringo Assembly.
News
1 week ago

Say none of them was nominated to the assembly.
Counties
1 week ago

Some stakeholders say ethnic division and low levels of education cause of poor performance.
Counties
1 month ago

Chebukati gazetted the list of party nominees to the Senate and National and county assemblies.
News
1 week ago
Post a comment
WATCH: The latest videos from the Star
by BY MATHEWS NDANYI
Elections 2022
19 September 2022 - 22:00
Read The E-Paper