Cotu boss who backed Raila to work with Ruto

• Atwoli said workers union had a tradition of working with the government of the day to improve workers' welfare, rights.

• He said the elections had been most peaceful, giving Kenya an opportunity to grow economically. 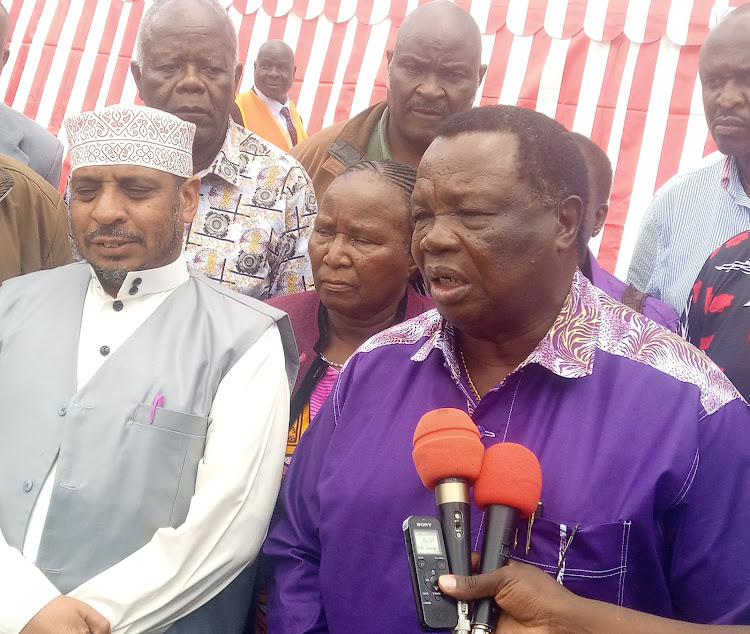 Atwoli on Saturday the workers union had a tradition of working with the government of the day to improve the welfare of workers.

Secretary general Atwoli said the elections had been most peaceful, providing the country with an opportunity to grow economically.

"We had assured the world the elections would be peaceful and we thank God that we went through smoothly and peacefully," Atwoli said. The election strengthened peace and unity in our nation," the union leader said.

He said elections come and go and the most important thing was for Kenyans to remain peaceful and united.

"With the existing peace and unity as workers, we now should go back to work and build our country,"

Atwoli said the right of all workers to speak their minds was enshrined in international labour charters and it was not wrong for anyone to taking sides on any matter, including politics.

He spoke in Eldoret during the funeral for Mzee Lazarus Chepkwony, the father of Coltu's first national vice president, Rev Joel Chebii.

Atwoli was with chairman of the Muslim Imams and Preachers in the region Abubakar Bini.

The funeral service was held at the Eldu Valley Baptist Church in Eldoret.

Atwoli was among key leaders of the the Azimio movement and had said, along with many others, that Ruto would not win.

“I don’t know who will be the president but I know who will not be president,” Atwoli had said in reference to Ruto. Initially he had also been quoted as saying Ruto’s name would not be on the ballot papers

However, in Eldoret Atwoli said the labour movement had since the time of his predecessors maintained the policy of working with the government of the day and they would do the same.

"We already held elections before the general elections and those claiming there would be fresh polls are misguided," Atwoli said.

He said all the unions had completed their internal polls and current office bearers were in office legally.

Atwoli congratulates Ruto, says Cotu ready to work with him

He said that the Union supported Ruto's call for unity and reconciliation.
News
3 weeks ago

Says he had the political skills and knew his way around
News
3 weeks ago
Post a comment
WATCH: The latest videos from the Star
by BY MATHEWS NDANYI
Elections 2022
18 September 2022 - 22:00
Read The E-Paper