•He was sworn to office by Machakos High Court Judge, Justice George Odunga.

•Malombe pledged a consultative, participatory and inclusive approach to handling the affairs of the county.

NEW OFFICE Kitui Governor Julius Malombe shows off his assumption of office certificate after  he was sworn into office  by Justice  George Odunga.Ends…..
Image: MUSEMBI NZENGU

Kitui governor Julius Malombe was on Thursday sworn into office at the Ithookwe showground during a ceremony that was witnessed by a mammoth crowd.

After taking the oath of office as Kitui governor for the second time, Malombe alleged that the county had been on a downward trajectory since he left office.

He was sworn to office by Machakos High Court Judge, Justice George Odunga.

Malombe pledged a consultative, participatory and inclusive approach to handling the affairs of the county.

In 2017, he failed to clinch his seat and was ousted by the now outgoing governor Charity Ngilu.

In this year’s polls, Malombe won back the seat even as the outgoing governor withdrew from the race.

Malombe said he was alive to the fact the expectations of the citizens of Kitui in his leadership were exceedingly high considering the extent to which service delivery had deteriorated over the last five years.

“Nonetheless we have no choice but to join hands and tackle the issues head-on. There is no room for retreat surrender or quitting. In this regard I request you indulge and join me in prioritization and focus on key developmental aspects in the next 100 days,” said Malombe 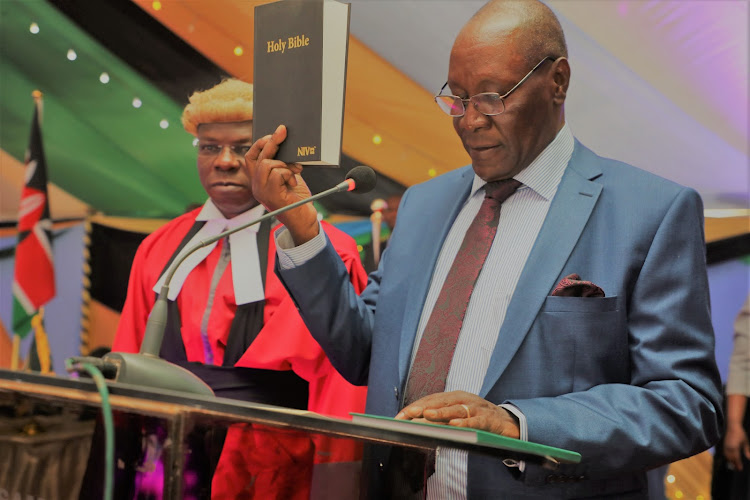 He thanked the Kitui people for showing confidence in his leadership when he was the pioneer governor and giving him a second chance this time round.

Malombe also thanked Wiper leaders Kalonzo Musyoka and Azimio One Kenya presidential candidates for publicly endorsing his candidature ahead of the August 9 polls.

He said the overwhelming public display of admiration the people of Kitui had shown for him was a clear indication that they appreciated the hard work he would put in "reclaiming, restoring" and transforming Kitui County.

He promised to fight corruption to enhance the smooth delivery of the County.
News
1 month ago