Raila is expected to file a petition at the Supreme Court by 2 pm. 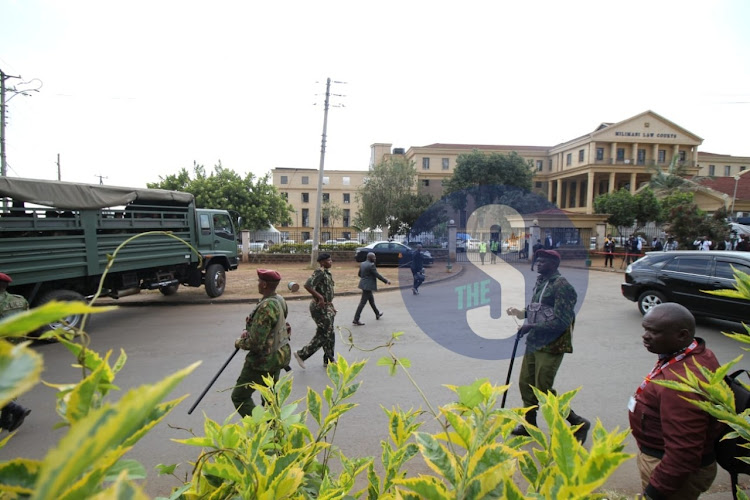 Security officers at the entry road leading to Milimani Law Court ahead of filling of petition challenging the announcement of William Ruto as President Elect in the just concluded general elections.
Image: Enos Teche

General Service Unit (GSU) officers on Monday were forced to disperse Azimio La Umoja supporters who had camped outside the Milimani Law Courts.

The Azimio supporters were seen causing commotion around the court where the Azimio team is expected to file a petition.

Head of security at the Judiciary Lazarus Opicho and his deputy Winfrida Rotich have been conducting recce on the operations ahead to ensure things go smoothly.

Af of 11 am, the Raila Odinga led coalition had filed the petition online.

Raila has since disputed the results, claiming there were election malpractices that the Supreme Court needs to have a look into.

Unlike the previous presidential election petitions, the Apex court moved from its tradition of hearing the petition from the Supreme Court Building in Nairobi's central business district.

Judiciary has announced that judges of all levels including the Supreme Court were prepared to handle election disputes.

Azimio coalition has up to 2 pm to file the petition.

A lawyer said Article 138 (3c) of Constitution will be one of the backbones of petition.
News
1 month ago

Azimio to file presidential petition at Supreme Court by 2pm

The case will then be heard and determined by September 4, 2022.
News
1 month ago

Azimio set to hold meeting at Kibra ahead filing petition

Raila claimed that the declaration of Ruto as the president-elect was null and void.
News
1 month ago
Post a comment
WATCH: The latest videos from the Star
by BERTHA OCHOMO
Elections 2022
22 August 2022 - 10:32
Read The E-Paper