Sakaja won the seat after after garnering 699,392 votes.

• Kananu took to Twitter on Friday noting that she will entrust the position to Sakaja after he is sworn in. 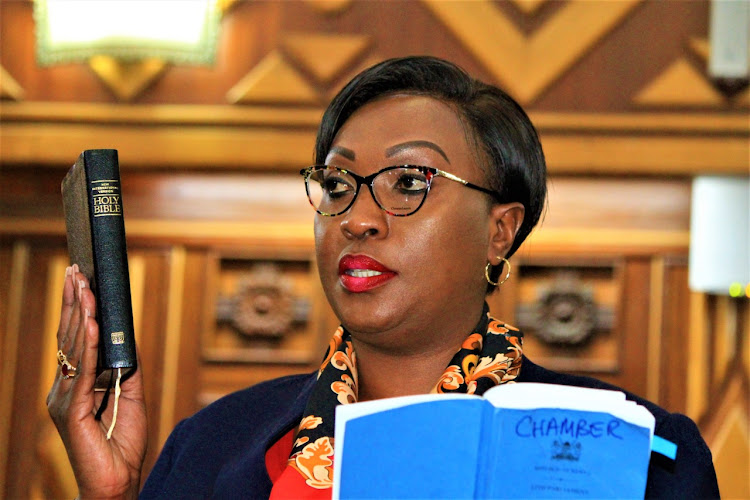 Current Nairobi Governor Anne Kananu has said she is ready to hand over power to Senator Johnson Sakaja who was elected Nairobi governor.

Kananu took to Twitter on Friday noting that she will entrust the position to Sakaja after he is sworn in.

"I will hand over Nairobi County to Sakaja Johnson, the Governor-elect when he's sworn in," she said.

She assured the Nairobi people of a smooth transfer of power when the time comes.

"My team and his team are working to ensure there's a smooth transition of power," Kananu added.

He is to succeed Kananu.

Sakaja who was vying on a United Democratic Alliance (UDA) party ticket defeated his main rival Polycarp Igathe of the Jubilee party who got 573,518 votes.

Kananu was the acting governor since the ouster of Mike Sonko in December 2020.

She was later sworn in on November 16, 2021 at the Kenyatta International Convention Center Comesa Grounds.

My administration will serve all regardless of party — Sakaja

Says he will work with all elected leaders of Nairobi for cooperation and synergy in service delivery.
News
1 month ago

Sakaja, Igathe meet after battling out for Nairobi governor seat

On Sunday, Sakaja invited Igathe for coffee after he conceded defeat.
News
1 month ago

NMS to go if tenure not renewed by new regime

Governor-elect Sakaja said all county functions will be reverted to City Hall.
Counties
1 month ago
Post a comment
WATCH: The latest videos from the Star
by BERTHA OCHOMO
Elections 2022
19 August 2022 - 14:09
Read The E-Paper