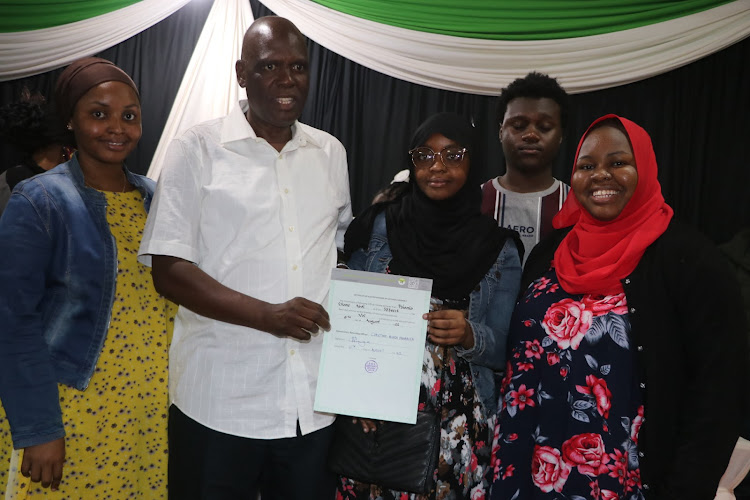 The story of Khamisi Chome is a true depiction of the saying that patience pays.

After a 25-year wait, Chome has finally captured the Voi parliamentary seat. He won on the Wiper ticket.

Chome was on Thursday night declared the winner by the constituency returning officer Christine Munga after garnering 9,418 votes against the incumbent Jones Mlolwa who got 8,426.

Outside the tallying centre at Mwangea Secondary School, hundreds of his supporters braved the chilly night to celebrate the victory.

The polished civil and water engineer-cum-businessman made his first attempt in 1997 on a Kanu ticket but narrowly lost to Basil Mwakiringo.

“The journey has been long. When I first vied for the seat, three of my children were not yet born and they are now adults,” Chome said in his acceptance speech.

After the loss, the 60-year-old father of five contested again in the 2002 general election on the Narc ticket but was also defeated by Boniface Mghanga with a difference of only 112 votes.

He made his fourth attempt during the 2013 general election on a TNA ticket but lost to Mlolwa.

The soft-spoken politician took a break from politics after the 2013 election after the death of his wife and did not contest in the 2017.

“When I started this race I was with my wife, but after the 2013 elections, I lost her forcing me to take a break. My children have fully supported me,” Chome said.

He now becomes the first person from Voi town to win the seat. The constituency has over the years been led by legislators from Mbololo, Sagala and Kasigau areas.

His over two-decade political lifeline, he said, has been sustained by his passion to lead and offer fresh leadership in the region.

“Power is never given, it is acquired. It has taken a long time to get a victory, we have been persistent and I believe we will deliver,” he said.

He further promised to consolidate all communities in the constituency to set up public-centred development projects.

Besides politics, he has been at the helm of different organisations as chief engineer.

“He started in the Ministry of Water as a resident engineer after acquiring a degree in civil engineering from the University of Nairobi in 1988,” Mohammed Washalla, his younger brother told the Star in an interview.

Washalla described him as a determined person with a great passion to transform Voi town.

“This is a dream come true. He has consistently fought for good leadership because he wanted to contribute in bringing change in the region,” Washalla said.

Washalla said Voi town, which emerged in the late 1890s during the construction of the Kenya-Uganda railway line has lagged because of poor leadership.

He holds a master’s degree in water engineering from the University of Dar es Salaam.