Head of police operations Saidi Kiprotich, however, said there was fracas involving supporters of some aspirants over posters.

•Others rode on horses while some patrolled on foot to ensure things were in order. 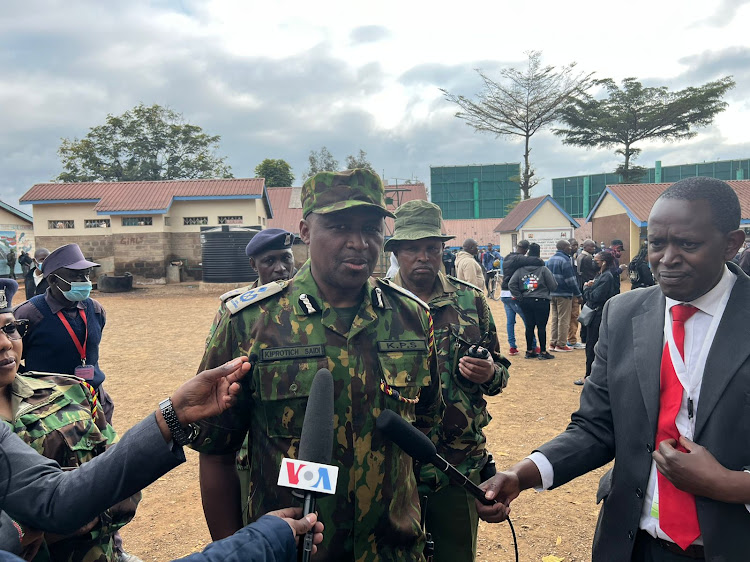 Nairobi has not reported any polls-related issues since voting started, head of police Kiprotich Said has said.

Said, however, said there was fracas involving supporters of some aspirants over posters.

“Some groups came and pasted posters of their candidate on top of another competitor, which sparked some fracas but no one was injured. We generally had a good time free of crime,” he said at Moi Avenue Primary polling station as he patrolled various stations to check on the progress.

Others rode on horses, while some patrolled on foot to ensure things were in order.

Police boss Hilary Mutyambai said the violence reported in some areas was due to dysfunctional electoral gadgets.

He said more than 150,000 security personnel are being used before, during, and after the polls.

They will man each of the polling stations and tallying centres.

Mutyambai said the security personnel is under instructions to guarantee Kenyans their safety as they vote and that all and sundry should go about their activities without fear of crime or harm.

“Formed police units under the National Police Service have been deployed across the country to offer tactical support to general duty officers before, during, and after the general elections,” he said.

He said the government has resourced the service adequately, especially with additional vehicles and operational equipment, to ensure seamless and continuous operations during and after the polls.

“Officers are well resourced and in a high state of readiness to handle all forms of threats that may arise before, during, and after the general elections,” he said.

The IG said the service had established a national election security command centre to be manned on a 24-hour basis and is fully equipped to handle election-related security challenges.

Officials there said they received calls from Kenyans complaining about the lack of voting materials or the failure of Kiems kits.

“So far, we have had a better time as compared to the past,” one officer said.

IEBC officials said they are finalising the process to start.
InPictures
1 month ago

[PHOTOS] Long queues as voting is ongoing in Kasarani