Sudi said Raila was looking for a scapegoat to reject the results.

•Sudi said the increased attacks on the IEBC by Odinga’s side were a clear indication that they had sensed defeat.

•The MP who addressed the median in Eldoret said Odinga was looking for a scapegoat to reject the results or boycott participation because of the impending defeat. 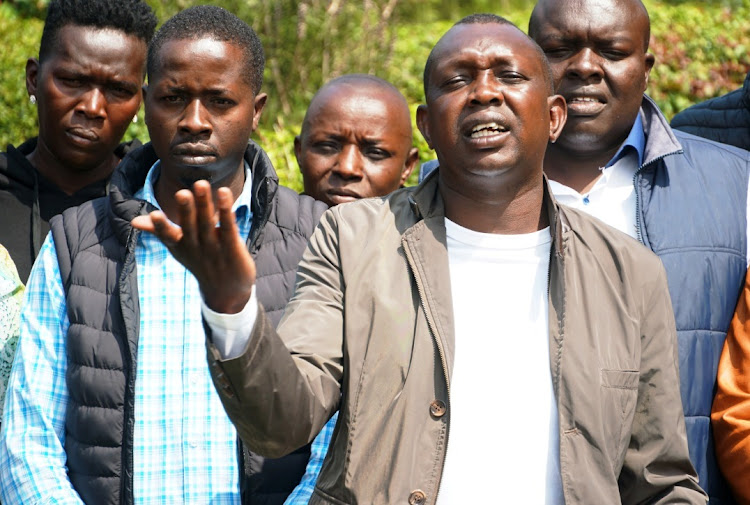 Kapseret MP Oscar Sudi has asked the Azimio Presidential candidate Raila Odinga to stop intimidating the IEBC ahead of the August 9 polls.

Sudi said the increased attacks on the IEBC by Odinga’s side were a clear indication that they have sensed defeat.

The MP who addressed the media in Eldoret said Odinga was looking for a scapegoat to reject the results or boycott participation because of the impending defeat.

“They have been telling us that they have the deep state and system on their side but they have realized that all that cannot give them votes," Sudi said.

He said Kenyans had decided to back Kenya Kwanza and no other means deployed by Azimio would help them win the elections.

Sudi said claims of rigging the polls were part of the kicks of a dying horse.

He singled out Suna East MP Junet Mohammed accusing him of making reckless statements which amounted to inciting Kenyans ahead of the polls.

“Junet is now the main baggage to Azimio and will cause Odinga to lose the polls. He has even been intimidating his colleagues in Azimio and sending them to operate on the periphery," Sudi said.

The MP said the recent claims by Azimio linking Senator Moses Wetangula to the printing of ballot papers was a desperate cry from a losing side.

“It's them who have the government machinery and we are left wondering how an ordinary person like Wetangula can do such. In the past, they were telling us about DP Ruto but now they have stooped too low with claims about Wetangula," Sudi said.

“Uhuru Kenyatta is not an ordinary person as he thinks and they should get better propaganda to use and not stupidity”, Sudi said.

He said the same Junet had also threatened that should Azimio win the polls, they would jail DP Ruto. Sudi termed such statements as reckless and inciting.

The MP claimed that some of the Azimio leaders had been involved in the theft at KEMSA and misuse of Covod-19 funds which they were now using to campaign.

He accused the EACC of protecting those involved in the KEMSA scandals instead of having them prosecuted.

The MP has urged the IEBC to remain firm and stick to the law in ensuring that the polls will be free and fair.

“What we don’t want is incitement. Whoever wins the elections will be a Kenyan and those who lose should keep quiet and wait for another chance," Sudi said.

Sudi however exuded confidence that Kenya Kwanza would win the polls in the first round.

ODM sending emissaries to woo me back to Azimio -Wetang'ula

He insisted that politicians like Junet will soon be stopped.
News
1 month ago
WATCH: The latest videos from the Star
by MATHEWS NDANYI
Elections 2022
07 July 2022 - 21:17