• Police have stepped up security including patrols and curfew enforcement in plans for the August 9 general election.

• Elgeyo Marakwet Governor Alex Tolgos said the security measures  should be sustained throughout the elections period. 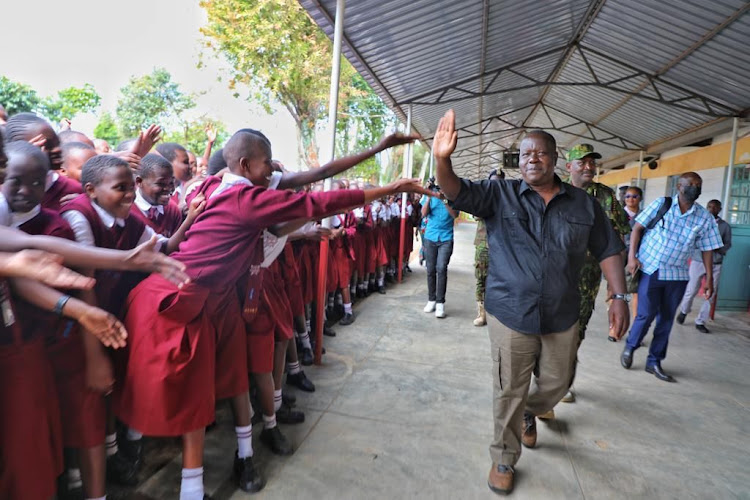 Residents of Kerio Valley have asked the government to lift the dusk-to-dawn curfew while calling for more security ahead of the general election.

They said measures introduced by Interior CS Fred Matiang'i to curb banditry have helped to stop the raids.

Police have also stepped up security patrols and heightened curfew enforcement in security plans for the August 9 polls.

Elgeyo Marakwet Governor Alex Tolgos said the measures were succeeding and should be sustained throughout the election period.

“We want total safety in Kerio Valley so that our people will be able to freely participate in the elections,” Tolgos said.

He spoke during a series of campaign rallies in the region. Tolgos is vying for the Senate seat in Elgeyo Marakwet on the Jubilee party ticket and will face incumbent Kipchumba Murkomen of the United Democratic Alliance.

Resident Paul Chemweno stressed the need to lift the curfew orders for freedom ahead of the elections.

“We appreciate the measures so far put in place by the government to restore security in Kerio Valley but the curfew should be removed and instead extra officers deployed,” he said.

Residents had expressed fears that insecurity would undermine the polls but the government has said additional security measures were being put in place. He did not elaborate.

Police in three weeks have recovered more than 35 illegal guns and arrested more than 130 people suspected to be involved in banditry in the Kerio Valley.

Security teams recovered guns from villages in Elgeyo Marakwet, Baringo and West Pokot, which have been the most affected by banditry.

“We urge those holding illegal arms to surrender or they will be rounded up to face the law," Maalim said.

He said security teams had profiled more than 350 suspected bandits.

“We will hunt for all of them so they face the law," he coordinator said.

The new measures were ordered by interior CS Fred Matiang'i who visited the region two weeks ago. He said the government would carry out a "painful operation".

“We cannot accept to have people who have the nerve to mercilessly kill innocent children," Matiangi said.

More than 300 additional police officers have been deployed for a security operation in the Kerio Valley region.

“Those engaging in criminal acts like banditry should either surrender or we will get them at all costs, using all means possible. Banditry must be stopped," Maalim said.

Police profile 350 for banditry, arrests expected in 'painful operation.
Counties
1 month ago
“WATCH: The latest videos from the Star”
by BY MATHEWS NDANYI
Elections 2022
05 July 2022 - 22:00