In his final address, governor says he is proud to have made Uasin Gishu better

• Mandago says his record speaks for itself and that he had prudently used more than Sh70 billion allocated to the county.

• He gave his final state of the county address at the assembly, dwelling on achievements in all sectors. 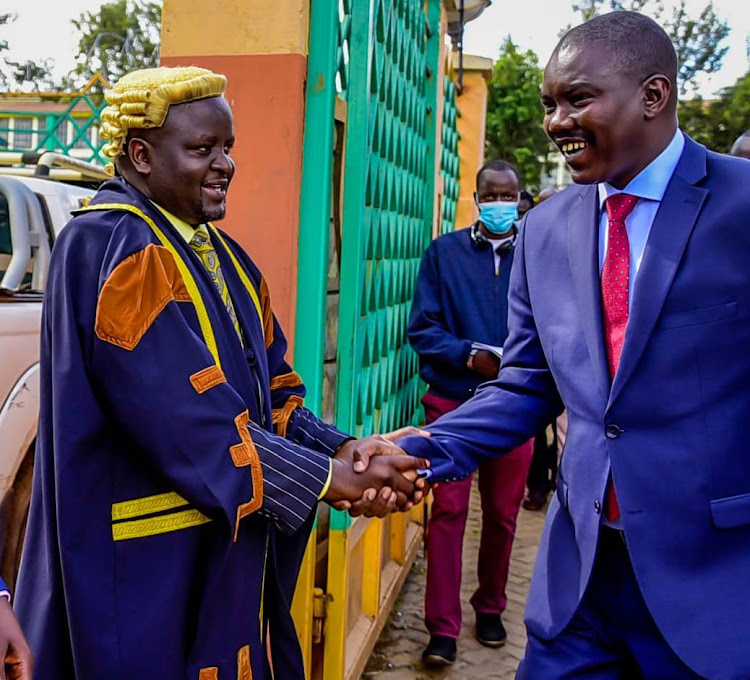 Governor Jackson Mandago says he will exit office with his head high, leaving Uasin Gishu county far better off than it was 10 years ago.

He delivered his final state of the county address on Wednesday. He is running for the Senate.

Mandago said his record speaks for itself and he had prudently spent more than Sh70 billion allocated to the county during his tenure.

In his address, he dwelt largely on his achievements in all sectors.

“I thank the residents of Uasin Gishu for electing me twice. And as I exit after the election, I will be a proud person for the development we achieved during my tenure," Mandago said.

He said he had helped to extensively improve infrastructure, including building walkways to improve pedestrian safety in Eldoret.

Lighting has been installed; when he took over, most areas were in darkness at night

“We have better connectivity in terms of roads and improved business because all our streets have adequate light at night.

"This improves the security and working environment for our people," the governor said.

In health care, Mandago said he ensured all health facilities were NHIF-accredited, with adequate supply of drugs and equipment.

The greatest challenge is the shortage of health personnel, Mandago said.

If he is elected senator, he said, he would push for allocation of more than 35 per cent of the national budget to the counties. Then they will be able to expand the healthcare system and hire more staff.

Access to water in Eldoret town had increased from 48 per cent to 75 per cent, he said.

Since he took over in 2013, sewerage had also increased to more than 56 per cent, Mandago said.

On education, the governor said he had helped recruit many young men and women to technical training institutes so they can earn a living.

On politics, Mandago criticised the handshake between President Uhuru Kenyatta and Opposition chief Raila Odinga. Because of their pact and the abortive BBI, he said, implementation of the Big 4 agenda had slowed down.

Mandago said the county was to get 2,000 housing unites that would have employed more than 16,000 workers.

It was not implemented as planned, he said, because priorities were changed and funding diverted through the handshake.

Mandago called for peace during the polls. He urged the IEBC to allow all candidates and all Kenyans to tally the election results on Forms 34C.

He said the tallying would only be based on IEBC results and no one would be allowed to declare results as that was the IEBC's mandate.

North Rift region will be peaceful during polls, says Mandago

Uhuru has not been to the North Rift for years after falling out with Ruto. North Rift is Ruto's political backyard
Counties
1 month ago

Modernisation cost Sh6bn, firm working under-capacity for lack of cotton.
Counties
1 month ago
“WATCH: The latest videos from the Star”
by BY MATHEWS NDANYI
Elections 2022
30 June 2022 - 22:00