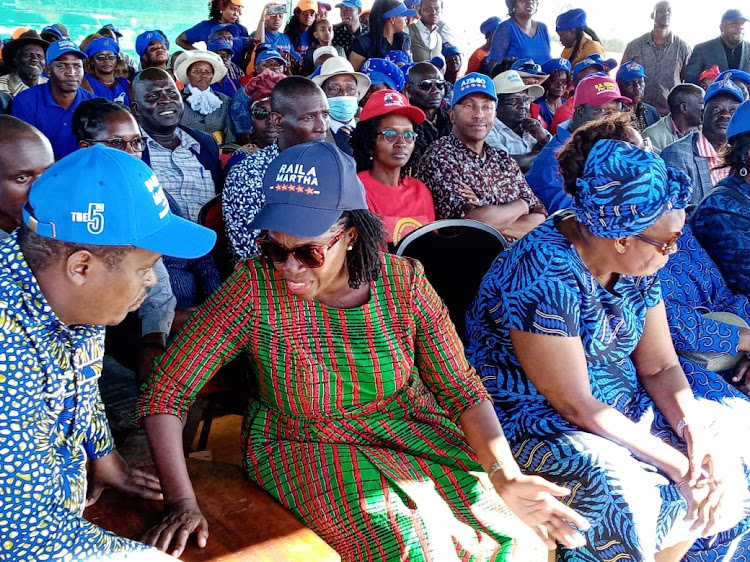 Azimio deputy presidential candidate Martha Karua says tribe should not be a factor in the August 9 election.

She said Kenyans should vote for leaders who have the capacity and will to serve the country.

Karua spoke during a rally at Huruma grounds, Eldoret on Sunday.

The Narc Kenya leader said as the country approaches the polls Kenyans should be able to determine, which leaders have the history and commitment to service.

She said Raila Odinga is the only leader among those vying for presidency who has serious commitment to fighting graft and transforming the economy.

“Our captain has made a commitment to implement all that he has promised, if elected,” Karua said.

The Azimio presidential running mate listed the promises including the fight against corruption, Baba care, free education, one industry per county and special care for single mothers.

Karua who abandoned her entourage and campaigned on foot through the streets of Eldoret for more than three kilometres urged residents to vote for Azimio on August 9.

Karua called on residents of Rift Valley and Kenyans to keep peace and unity during election.

She said political competition was not enmity and Kenyans should prepare to participate in the polls, while ensuring the country remains peaceful.

"We are all children of one house called Kenya and competition like in politics should not cause disunity," the Narc Kenya leader said.

She also urged religious leaders to pray for the country ahead of the polls.

"The church should help Kenyans to understand the difference between bad and good, even as we prepare to elect leaders for our nation", Karua said at Ayub Kinyua PCEA church in Eldoret where she attended a church service.

It was Karua's first visit to the region since she was appointed as Raila's running mate.

Former Minister Sally Kosgey said Rift Valley is not anyone's stronghold and many residents believe in Raila's capacity to take Kenya to a higher level of development.

She said God had used Raila to remember the plight of women in the county by appointing Karua as running mate.

Kosgey said Karua has a unique standing in society because of her level-headed leadership and integrity. "She is a firm and fair woman who all Kenyans respect."

Kituyi said Azimio and Raila are more interested in the welfare of mitumba traders and not mitumba clothes.

“That is why Raila said he would uplift the lives of mitumba traders by manufacturing affordable clothes, to be sold to Kenyans. Those misinterpreting what he said have no capacity to understand,” he said.

The leader who shelved his bid in favour of Raila said he has visited all parts of the country but has not encountered Kenyans who think UDA presidential running mate Rigathi Gachagua can make a future president.

He said Ruto's decision to pick Gachagua was a mistake that exposed his weakness, as a leader who cannot be entrusted with power.

"Back home in Bukusu land we have a saying that a dying cow does not hide it's private parts," Kituyi said.

Karua walked for more than three kilometres waving to residents.
News
3 months ago

Karua received a rousing welcome at the church where she urged religious leaders to pray for the country.
News
3 months ago