Lusaka gets IEBC nod to vie for Bungoma governor seat

He said he is prepared financially, physically and mentality to face off with his opponents.

• The Senate Speaker thanked the Ford Kenya party for giving him an opportunity to run to seek the governor post in the coming elections.

• He said that he will contact a peaceful campaign as directed by the IEBC. 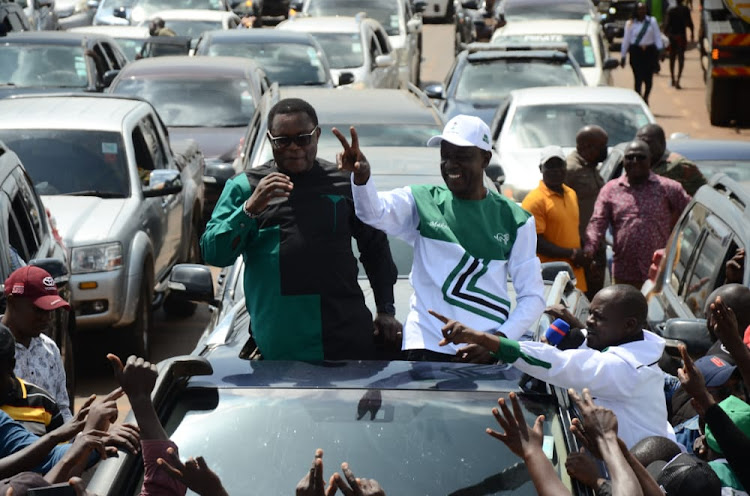 Lusaka with Kanduyi MP aspirant John Makaili during the campaigns in Bungoma town after the clearance on June 5,2022.
Image: TONY WAFULA

Bungoma County gubernatorial aspirant Ken Lusaka has been cleared by the IEBC to run for the seat in the August polls.

Speaking at IEBC offices in Bungoma town on Sunday, Lusaka said he is prepared financially, physically and mentality to compete with Azimio's DAP-K candidate Wycliffe Wangamati.

"Today is a good day in Bungoma because I have been cleared by the IEBC to run for the gubernatorial seat come August.

"I want to assure my supporters that I am prepared to battle with my opponents; I must win," Lusaka said.

Lusaka is seeking to unseat Wangamati on a Ford Kenya party ticket under the Kenya Kwanza umbrella.

The Senate Speaker thanked the party for giving him an opportunity to seek the governor post in the elections.

"I'm going to mount a serious campaign trail that will traverse the entire county seeking for my votes and that of our presidential flag bearer William Ruto," he said.

Lusaka said if elected, he will empower youths and women by giving them tenders saying most of the contractors that have been given tenders by the current administration aren't from Bungoma.

He said under his administration, 30 per cent of the tenders will be given to the youth.

Lusaka added that business operators in Bungoma County will be given a tax waiver during public Holidays and on weekends to cushion them against the hard economic times .

He said he will also repair and install street lights at all markets in Bungoma to ensure the county becomes a 24-hour economy.

Bungoma Senator Moses Wetang'ula while addressing the media at the same function said that Kenya Kwanza is prepared to compete with the Azimio la umoja Presidential flagbearer Raila Odinga in the August polls.

"We are happy that out presidential aspirant William Ruto was cleared by the IEBC ready for the remaining short journey battle," Wetang'ula said.

He lauded Lusaka for accepting to be the Ford Kenya party gubernatorial aspirant in the August polls.

The senator said Lusaka is popular and him being Kenya Kwanza's coordinator in the Western region, he will give him all the support to ensure that he becomes the next Bungoma governor.

Lusaka was appointed by Ruto to lead the Western region Kenya Kwanza campaigns.

"Let's all rally behind him and give him moral support," Wetangula said, adding that the Kenya Kwanza team will ensure that all the demands and expectations placed in Lusaka are met.

"We want to send a word to our opponents that we don't have any bad intentions with them but we have a defense mechanism in place to deal with those who cause violence during the campaigns," Wetang'ula said.

His running mate Vincent Mmaitsi failed to resign on time.
News
3 weeks ago

They laughed off claims that IEBC would disqualify them for lacking academic qualifications.
News
3 weeks ago
WATCH: The latest videos from the Star
by TONY WAFULA
Elections 2022
05 June 2022 - 15:10