'BEAT HIM HANDS DOWN'

Urges residents to back his bid, saying they should pick young and vibrant leaders

• Machacha asked Wetang’ula to focus on the speaker's position in the Kenya Kwanza power-sharing deal.

• He said he will ensure FPK grows into a big party. 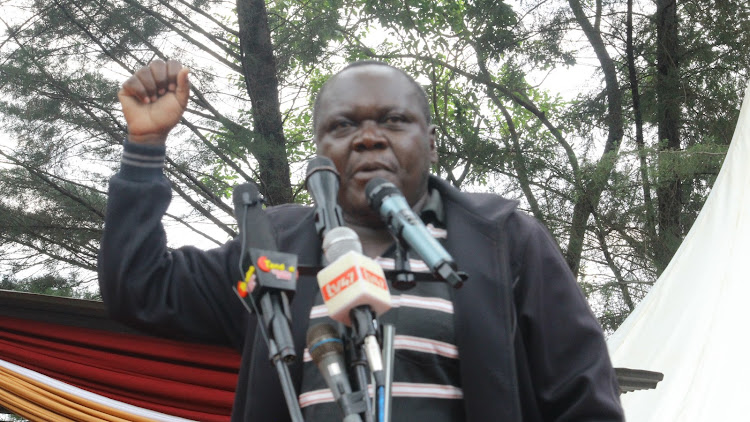 Bungoma Senate aspirant Jacob Machacha from Maporomoko in Webuye West has said he is prepared to defeat incumbent Senator Moses Wetang’ula in the August polls.

He is vying for the seat on the Federal Party of Kenya ticket.

Machacha urged residents to back his bid, saying it is time Bungoma picks young and vibrant leaders to represent the county at all levels.

He spoke to the press in Webuye on Thursday.

“Some leaders like Senator Wetang’ula have been in leadership positions for a long time. It's time Bungoma residents opened up and voted for young, fresh and vibrant leaders who will fight for development,” Machacha said.

“I have not seen a serious and focused senator aspirant like myself. I will beat Wetang’ula hands down, I want to teach him a lesson.”

Machacha asked Wetang’ula to focus on the speaker's position in the Kenya Kwanza power-sharing deal.

“Wetang’ula was given a position in the recent power-sharing deal in the Kenya Kwanza coalition. I don’t know he is coming back to complicate issues in Bungoma,” he said.

He said he is an official in FPK and will ensure that it grows into a big party.

Says Raila betrayed his younger brother Tim Wanyoni, who wanted to run for governor.
News
1 month ago
“WATCH: The latest videos from the Star”
by TONY WAFULA
Elections 2022
22 May 2022 - 22:00