Oka will unveil its Presidential flagbearer later this month.

• On why they did not attend the State House Luncheon presided over by President Uhuru Kenya, the OKA principals noted that the event had been organised for MPs. 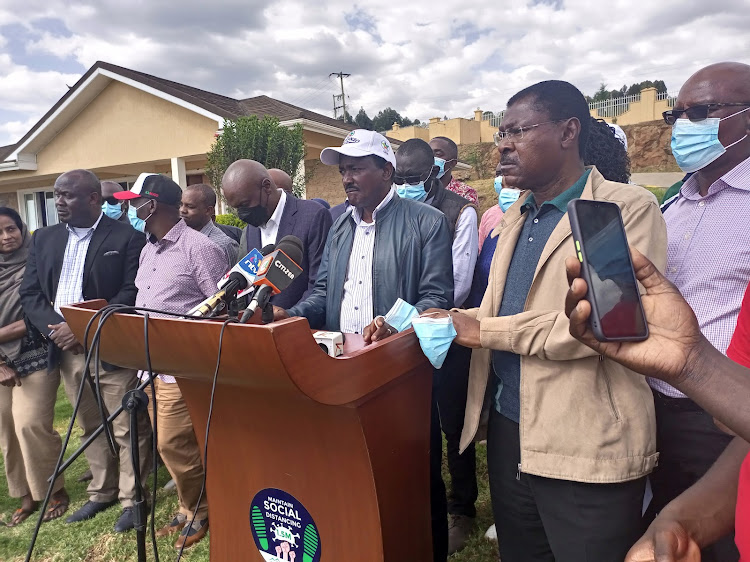 The party joins a long list of parties from the Mt Kenya region that are working closely with OKA among them Narc Kenya under the leadership of former Cabinet Minister, Martha Karua.

"OKA acknowledges and appreciates the growing support as witnessed by the presence of our partners from the Mount Kenya Unity Forum and DP," he said.

He said the supporting parties were represented by Tujibebe Wakenya party leader William Kabogo. Officials Ndung'u Gathenji and Rosa Wangu were in for Narc Kenya while Joseph Mathai and Anthony Kaara were present for DP.

Oka will unveil its presidential flagbearer later this month.

Karanja said his team had made considerable progress in picking the candidate.

He said the committee had submitted a report that brought OKA close to identifying and unveiling a flag bearer.

He observed that OKA was an alliance of different political parties thus the need for extensive consultations before settling on a particular candidate.

"These member parties must consult their respective membership through their established organs to consider any such recommendations and ratify it," said Karanja.

Amani National Congress (ANC) boss Musalia Mudavadi was absent with apology and his party was represented by Godfrey Kanoti.

On why they did not attend the State House Luncheon presided over by President Uhuru Kenya, the OKA principals noted that the event had been organised for MPs yet some of them were not in that category.

"Mudavadi and Musyoka are not MPs so there was no way they could attend the meeting while I and Gideon Moi were on official duty serving our constituents," said Wetangula.

He added that there was no malice in their absence.