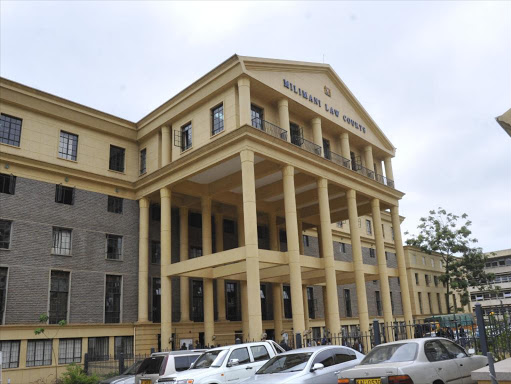 “The tribulations of my client are synonymous with Masaibu ya Ndugu Jero”.

Those were the words of lawyer Nelson Havi to Milimani chief magistrate Wendy Kagendo in his bid to bring to the attention of the court Mary Wambui’s sufferings in the hands of the state.

Masaibu ya Ndugu Jero is a play that was written in 1960 by renowned Nigerian author Wole Soyinka, which dramatises the pains of Jero.

“It is important so that the court is not a stranger in Jerusalem,” Havi added.

He was telling the court to be mindful of the issues surrounding Wambui’s arraignment in court on Thursday while deciding bond terms.

Havi, who was appearing for the accused alongside Elgeyo Marakwet Senator Kipchumba Murkomen, said the offences were misdemeanours and that Wambui ought to have been granted free bond.

“These are misdemeanours whose mandatory penalty is Sh500 per day for all the days concerned. It is even preposterous that she (Wambui) had to spend the night in police custody,” Havi said.

Kagendo released her on a cash bail of Sh50,000 with one contact person or a bond of Sh100000 and set the pretrial for January 15.

Wambui’s arraignment came less than a month after she surrendered to court on December 9, 2020 following a warrant of arrest that was issued against her in a Sh2.5 billion tax evasion case.

On the previous day, Wambui escaped a police dragnet at Weston Hotel in Nairobi.

Weston Hotel is owned by Deputy President William Ruto. It was alleged the DP was at the premises on that Wednesday night when Wambui dodged police.

In court, she was represented by lawyers Havi and South Mugirango lawmaker, Sylvanus Osoro. Wambui is believed to be among the billionaires bankrolling Ruto’s presidential bid.

Tellingly, her lawyers are all UDA-leaning counsels. UDA is the political vehicle that Ruto will use to seek the presidency in August.

Havi, who is the serving Law Society of Kenya president, has already declared his interest to run for the Westlands parliamentary seat on the UDA ticket.

When Wambui was arrested on Wednesday, it was lawyer Kipchumba Murkomen who visited her first. Murkomen is a stalwart in UDA and one of the closest allies of the Deputy President.

Wambui’s lawyers have always claimed her tribulations are linked to her backing for Ruto’s presidential bid. They believe she is being persecuted by the state for her political leanings.

It is for this reason that Havi on Thursday reminded the court of Wambui’s tribulations and asked that she be given free bond.

“But if the state wants some money, then give them Sh5,000,” Havi told the court.

Wambui’s tax evasion case is before anti-corruption magistrate Felix Kombo. She is accused alongside Purity Njoki Mungai. The two are directors of Purma Holdings Limited, which has been listed as the first accused.

In the Thursday case, Wambui had surrendered the gun to police on December 15 last year, a day after the Firearms Licensing Board said she held the common pistol illegally.

Her license to hold a firearm had expired on April 17, 2020. The gun was handed over to officers at Runda police station who would later forward it to the board.

Wambui said she had wanted to renew her expired firearms but failed after she found the Firearms and Licensing Board’s offices in Industrial closed because of Covid-19 restrictions.

She later travelled out of the country and was unable to renew the license.

It is an offence under Section 11(4) of the Firearms Act CAP 114 not to comply with a demand to surrender a weapon.