Patients travelling for treatment to be prioritised for J&J vaccine

•Kenya on Friday last week received 141,600 doses of the single shot vaccine that was procured through the Africa Vaccines Acquisition Trust (AVAT).

•The second delivery of 252,000 doses is expected in the country any day this week 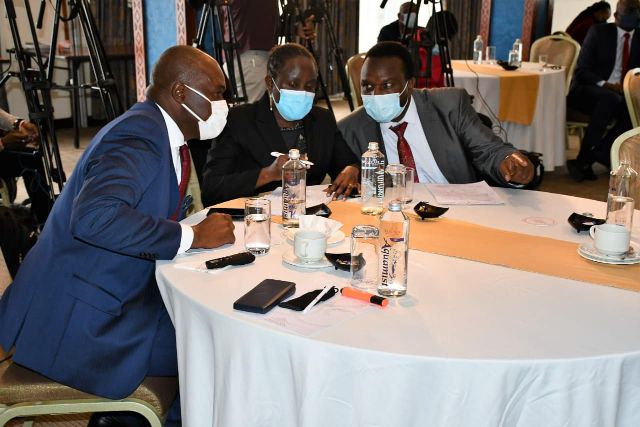 Patients which chronic ailments such as cancer and in need of urgent treatment abroad will be among those who will be prioritized in the issuance of Johnson and Johnson vaccine.

Kenya on Friday last week received 141,600 doses of the single shot vaccine that was procured through the Africa Vaccines Acquisition Trust (AVAT).

The second delivery of 252,000 doses is expected in the country any day this week.

“Like I have received a special request of somebody who is going to India for treatment and cannot afford to wait for a second dose after one month to go for treatment,” Ag Health DG Patrick Amoth said.

“It will be at the discretion of the healthcare providers but we have given guidelines on how to deploy. Fortunately JJ has a longer shelf life compared to these other vaccines,” he added.

The distribution of the vaccines started on Thursday beginning with national health facilities.

“We will start with our facilities at national level, Kenyatta National Hospital, Mbagathi and Mama Lucy but we will also be able to deploy it nationally because the demand is there,” he noted.

This comes after reports that some people had been arrested and arraigned for selling fake Johnson and Johnson vaccines.

Three suspects are said to have impersonated medical doctors and administered what is believed to be fake Johnson and Johnson Covid-19 jabs.

The suspects were arrested on Tuesday at Crane Hospital along Lumumba Drive, Kasarani where they administered fake vaccine to unsuspecting clients at Sh3,000 per jab.

The three according to the Head Directorate Preventive and Promotive Health at the ministry Dr Andrew Mulwa were nabbed through the ministry surveillance system working closely with Nairobi Metropolitan Services.

"But the truth is the Johnson and Johnson procured through the AVAT mechanism has not been procured to any station in this republic," Mulwa warned.

The illegal vaccination occurred on diverse dates between the month of July and August 2021 and was reported on September 7, 2021, way before the vaccines landed in the country.

“Johnson and Johnson just came into the country last week on Friday, so I am surprised that some people were reportedly vaccinating people with JJ in early July and August,” Amoth said.

He added:  “I don’t know where they would have gotten it from if us as a government we could not be able to access and even the doses we received are quite limited telling you that this vaccine in terms of availability is still quite constricted.”

The DG however noted that the people who receive the jab might require a booster dose later as emerging evidence has shown that after vaccination immunity tends to reduce with time.

Kenya has so far received 5.1 million doses of vaccines including 1.7 million of Moderna donated by the US government.

The plan is to vaccinate at least 10 million people by December and at least 26 million by end of 2022.

To date, 2.9 million doses have so far been administered across the country with three per cent of the targeted adult population having been fully vaccinated (817,210).