•"None of these staff members have tested positive for coronavirus. Should any of them exhibit any symptoms, they will be tested for the virus."

•The hospital is now educating patients about the consequences of non-disclosure which is an offence punishable under the law. 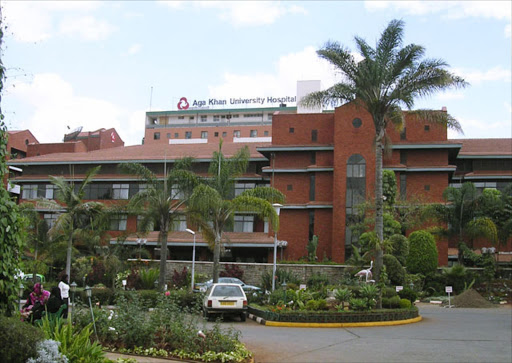 Several medical staff at the Aga Khan University Hospital in Nairobi have been quarantined because they interacted with the 66-year-old man with Covid-19 who died.

The Star learnt the patient initially did not disclose to medics that he had travelled outside Kenya.

He presented himself to the hospital with mild fever and was prescribed medication to take at home.

"We do confirm that a number of our healthcare workers were exposed to a Covid-19 case by virtue of non-disclosure by the patient on their travel history," Dr Majid Twahir, an associate dean and the chief of staff at the hospital, told the Star.

The patient, who passed away on Thursday afternoon, returned to the hospital after three days when his condition worsened.

This time, he detailed his travel to southern Africa and was immediately admitted and secluded in a special area.

Dr Twahir said the staff who interacted with him in the first visit be quarantined 14 days as a precaution.

He said their exposure was classified into high or low risk and majority of them had low risk exposure.

"This notwithstanding, since this was discovered we took the necessary precautions immediately. The affected clinicians are currently under quarantine for the required 14 days," he said.

"None of these staff members have tested positive for coronavirus. Should any of them exhibit any symptoms, they will be tested for the virus."

Dr Twahir noted exposure of healthcare workers to Covid-19 is a challenge that countries across the world are grappling with.

"We have drawn lessons from other parts of the world, especially Italy and South Korea where there have had polar end of risks to clinical staff," he told The Star.

"As this pandemic unfolds, Kenya will need to deliberately put in place protocols to deal with the exposure of healthcare workers to Covid-19."

He said the hospital is now educating patients about the consequences of non-disclosure which is an offence punishable under the law.

"We have also provided protective equipment to all staff that are interacting with suspected cases. Within our response plan, we have set out specific protocols of how to deal with Covid-19 cases to ensure we are protecting our healthcare workers as well as other patients seeking care at the hospital," Dr Twahir said.

The 66-year-old Nairobi businessman was the first Kenyan to die of the virus, on Thursday afternoon.

“We have received the sad news of the first patient who had tested positive for coronavirus. The 66-year-old male Kenyan citizen who passed on this afternoon had been admitted at Aga Khan ICU.

“The man who was suffering from diabetes had arrived in the country on March 13 from South Africa via Swaziland (eSwatini)," Kagwe said.

The man's family members also announced his death on social media and detailed his last travels.

"It is likely he contracted the virus in South Africa," an official aware of the case told the Star.

Following his death, there are now 30 reported coronavirus cases in Kenya, with one of them having recovered.

CS Kagwe said of these, two are critical. One is a French national and Kenyan at the ICU at Aga Khan University Hospital.

There were no new cases reported on Friday.

He said Nairobi is leading with 21 cases of Covid-19 followed by Kilifi with 6, Mombasa, 2, while Kajiado and Kwale counties each have one case.

He said some 931 close contacts are being monitored and currently five cases are admitted at Mbagathi Hospital awaiting results.

“So far we have tested 752 persons and starting this Sunday, we embark on mass testing for 2,000 people who arrived in the country and currently under quarantine facilities,” Kagwe said.

The CS said the exercise will be extended to all close contacts of confirmed cases.