Makueni residents directed to pick bodies of loved ones, bury them in 48 hours

County commissioner directs all burials to take place after 48 hours.

• Makueni County Commissioner Mohammed Maalim also directed that burials from now on will be taking place after 48 hours.

• Mohammed also directed that burials from now on will be taking place after 48 hours and only loved ones will be allowed to attend burials to prevent people from being infected with the Covid-19. 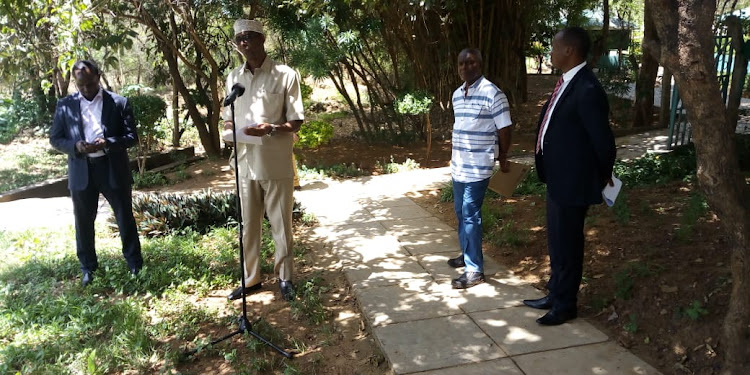 Makueni residents have been directed to pick up bodies of their loved ones preserved in all funeral homes and bury them immediately before the county government does it without their consent.

Makueni County Commissioner Mohammed Maalim said the bodies should be picked and buried within the next 48 hours.

According to Maalim, after the 48 hours elapses, the county government through the Public Health Act will take charge and bury them without any reflection from the family members.

"If they fail to collect the bodies of their loved ones, the bodies will be disposed of," he said.

Mohammed also directed that burials from now on will be taking place after 48 hours.

"The county government will ensure all bodies are evacuated with an immediate effect," said Mohammed.

While addressing the press on Monday during the County Emergency Response Team meeting on coronavirus on Monday, Mohammed said only loved ones will be allowed to attend burials to prevent people from being infected with the Covid-19.

He also revealed that touting in all bus stations has been banned with immediate effect and urged all matatu operators to make sure they carry passengers half of their capacity.

This comes a few hours after the county also demolished all kiosks in Wote town on grounds that the owners were not following government orders.

Muguka kiosks and outside small hotels were also demolished.

Makueni Governor Kivutha Kibwana who seconded the commissioners directive said the government will ensure no social gatherings will be allowed in the county and urged residents to keep a social distance.

Kivutha added that even though the coronavirus will hit the economy badly, it would be better than losing lives.

The governor also revealed that the authorities are tracking down a Catholic nun who came back from Spain and refused to self-quarantine even after promising she would do so.

Kivutha said the police are tracking down all the contacts she interacted with in order to put them under self-quarantine.

He warned that the people who are not following rules and risking other lives will be prosecuted.

He said the measures put in place were not meant to be punitive but to rather protect them.

"It's important to note that this pandemic is not a joke. Let's adhere to the given orders, sanitize and avoid unnecessary travelling and if possible stay at home," said Kivutha.

"It has reached a point where its no longer a plea but a command to make sure that our people are safe from this pandemic."

Funerals, weddings to be banned and bars closed due to Coronavirus

Culture of people flocking funerals should be suspended during this period.
News
1 week ago

Even gatherings within the street are banned. Stay at home. - CS Kagwe.
CORONAVIRUS
6 days ago