"This is not a joke. Kenyans must take this matter with the seriousness it deserves." Kenya to suspend international flights from Wednesday in wake of Covid-19

• He said that they have noticed that majority of Kenyan have continued to ignore these measures and are behaving as if its business as usual. 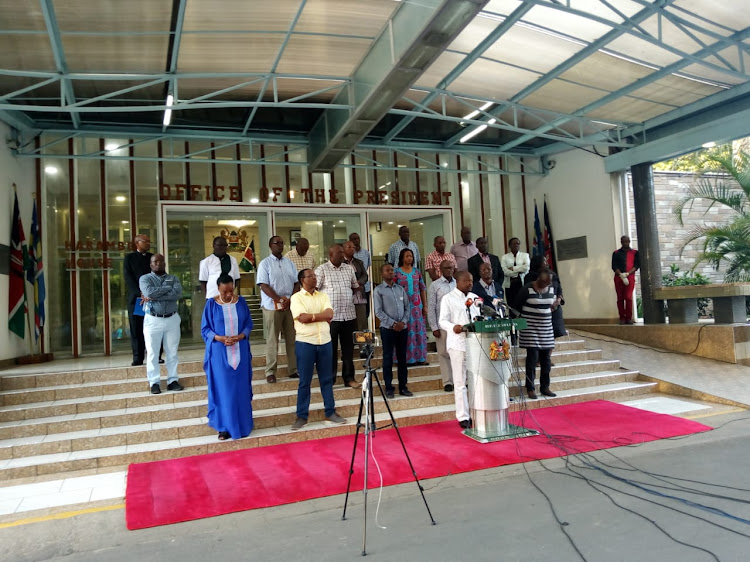 The government has suspended all international flight effective Wednesday night. The only exception is cargo flights.

These were the words of Health CS Mutahi Kagwe on Sunday.

"Those coming into the country between now and Wednesday will undergo mandatory quarantine at a government facility at their own expense," he said.

Kagwe said that those countries who want to evacuate their  nationals can do so.

"Whereas we allow Kenyans and foreigners to come to Kenya.. there are those who are not doing self quarantine.. all persons who violate the requirement will be forced to forcefully quarantine at their own cost and will be arrested and charged," he said.

Kagwe said the government has noticed the majority of Kenyans have continued to ignore prescribed measures and are behaving as if it's business as usual.

"This is not a joke. Kenyans must take this matter with the seriousness it deserves. If we continue this way, the disease will teach us abnormally," he said.

Kagwe said all the bars will be closed on Sunday with immediate effect.

"Effective midnight tonight, all bars to remain closed until further notice, restaurants to remain open but operate on take away basis," he said.

Last week, Kagwe had said bars should close at 7:30 pm, but he changed tune on Sunday, saying they will remain closed.

Even gatherings within the street are banned. Stay at home. - CS Kagwe.
Coronavirus
2 years ago

Five are Kenyans, three are foreigners - 2 French, one Mexican.
Coronavirus
2 years ago

Senior officials will not be spared - CS Kagwe.
Counties
2 years ago
Post a comment
WATCH: The latest videos from the Star
by NANCY AGUTU Deputy Digital Editor
Coronavirus
22 March 2020 - 17:59
Read The E-Paper