All arrivals must commit to self-quarantine - CS

Health CS says anyone who violates quarantine agreement will be charged, could be jailed

• Passengers will be required to self-quarantine for at least 14 days, otherwise,  failure to which they will be charged.

• Public urged to report anyone who had agreed to self-quarantine but did not do so. 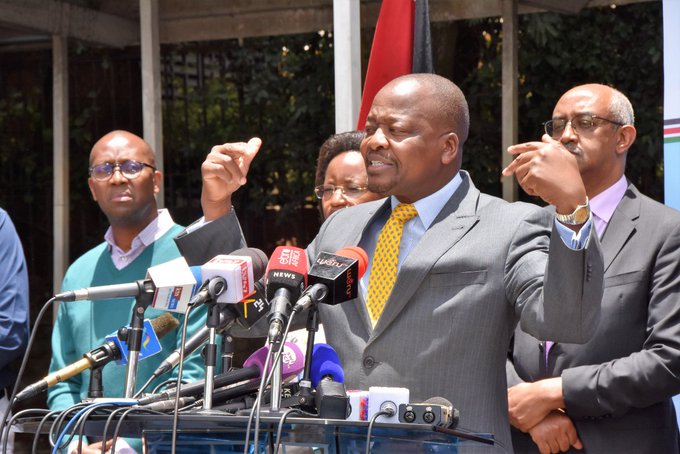 All travellers entering the country must sign a legal form to commit to self-quarantine, otherwise, they will be charged and could be jailed.

The forms have been available at the airports since Wednesday, Health CS Mutahi Kagwe said on Wednesday.

After signing, passengers will be required to self-quarantine for at least 14 days.

The decision is among measures to limit the spread of coronavirus that could be carried by people entering the country.

The CS confirmed three more positive cases on Wednesday bringing the total number of Covid-19cases in the country to seven.

“It is an offence punishable by jail to say you will self-quarantine then don't. Effective from today, any Kenyan from outside the country must sign a legal form at the airport to confirm they are going to quarantine themselves,” Kagwe said.

He added, “That gives us the instruments to actually jail you if you do not follow the procedure. If you do not and the public pronounces you as such and it is proved as such, we will then take you, self-quarantine you forcibly for 14 days and then charge you.”

The CS said anyone who violates a self-quartine pledge can be reported via   *719#.

A Kenyan who travelled to the country on Tuesday morning had expressed concern that he had been furnished with Ebola forms to fill instead of coronavirus forms.

"The first question was whether I had been to Congo in the past 21 days so I began wondering why am I being asked about Congo? Only for me to see the form indicated as Ebola forms,” he told the Star on Wednesday.

He also expressed concern that since he went back to his house on Tuesday, nobody has bothered to find out whether he is practising self-quarantine.

“We had come through Addis Ethiopia from Yemen which so far has zero cases [of Covid-19]ut I strongly feel that everyone on that plane should have been placed under self-quarantine."

Post a comment
WATCH: The latest videos from the Star
by MAGDALINE SAYA REPORTER
Coronavirus
19 March 2020 - 05:00
Read The E-Paper