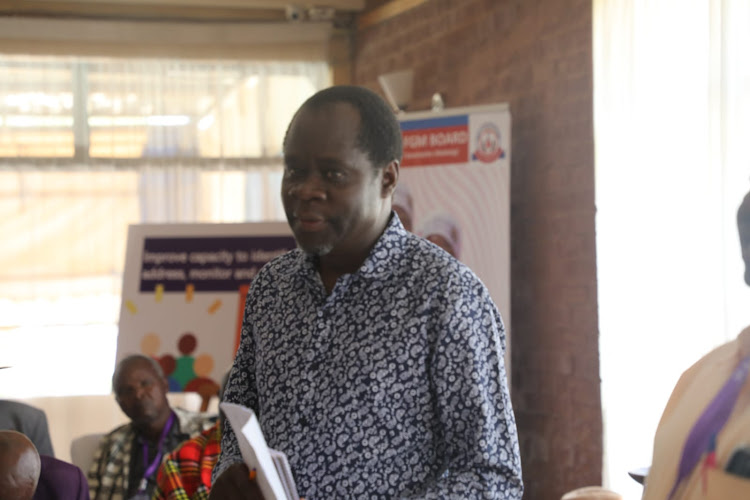 Anti-FGM Board programmes Manager Nyerere Kutwa speaking during the Inter-county visit in Bungoma.
Image: /ANTI-FGM BOARD

Elders from the Sabaot community in Mount Elgon have been asked to emulate their Samburu counterparts in the fight against the FGM menace.

This was the message to them during the Kenya-Finland Bilateral Programme on Gender-based violence (GBV) inter-county visit to Bungoma over the weekend.

The programme is Kenya and Finland's bid to end the practice of Female Genital Mutilation (FGM) in the country.

Kenya’s Anti-FGM board also took part in the programme.

“We met with cultural elders from the Sabaot in Mount Elgon and the Samburu community under the theme Tutembee Pamoja,” they said.

The programme Manager Nyerere Kutwa applauded efforts by Samburu elders for their declaration to end FGM in their community.

He noted that there were 21 cases of FGM reported in the Mount Elgon region during the holiday season.

“I encourage Samburu elders to empower their Sabaot counterparts to emulate them,” he said.

The programme aims at bringing together cultural leaders from areas where FGM and child marriage are rampant to create awareness of the law and efforts by elders to address the practice by sharing perspectives and strategies.

.They said that while the elders understood that change is gradual, they were positive that FGM is an illegal act and vowed to partner with other communities to root out the harmful practice.

Parents should be in the front line to protect their children against any harm.
Opinion
3 weeks ago

FGM prevalence drops by more than half after 24 years - report

The government has enacted a legislative ban on FGM and child abuse.
News
3 weeks ago

The 30-year-old said she aided in the cutting of her two daughters aged 11 and 13 years old.
News
3 weeks ago

Since December 1, the Kehancha Law Courts have been prosecuting cases involving 38 suspects.
Counties
3 weeks ago
Post a comment
WATCH: The latest videos from the Star
by SELINA TEYIE
Western
23 January 2023 - 16:47
Read The E-Paper