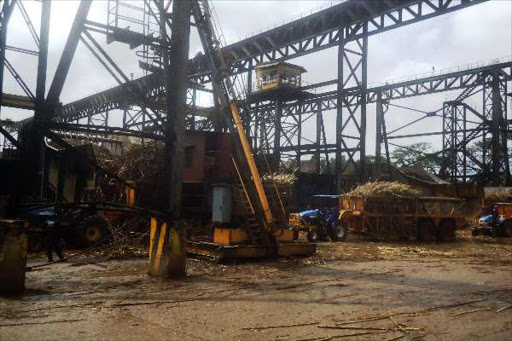 Cane yard with sugarcane for crushing at the Mumias Sugar Company
Image: FILE

Operations manager Stephen Kihumba said the company is currently operating at 25 per cent of its capacity as maintenance continues.

Kihumba said they have conducted test runs in terms of sugar production,  adding that maintenance of the factory is at 95 per cent.

He said the company is currently producing sugar in 50kg packages, adding that it will start producing 1kg and 2kg packages by next week and fully hit the market.

“Once we achieve 100 per cent operation, our focus will shift from half shift to full shift operations,” he said at the factory on Tuesday.

The company is currently crushing 2,000 tons of cane daily. It has an inbuilt capacity of 8, 400 tons.

The Sarrai Group won a 20-year-lease to revive the debt-ridden miller from the KCB Group which placed it under receivership in September 2019 over unredeemed debts.

He urged politicians to keep off the ongoing plans to revamp the miller and play complementary roles.

He said politicians should focus on creating awareness among farmers over matters of registration and policy and encourage them to plant more sugarcane.

“Politicians should keep off matters pertaining to the operations of the company and give us ample time to actualise the dream of reviving the factory,” Kihumba said.

“We are engaging as many farmers as possible for the company to have a reliable supply of sugarcane."

The management is in the process of planting cane on the factory’s 8,000 acres nucleus estate to complement supplies from out-grower farms.

Kihumba said they have nothing to do with the former employees of the company who have been demanding Sh2.3 billion arrears.

He said the former employees should engage the receiver manager,  adding it was the receiver who was handling issues of creditors.

He said the company will recruit part of the former employees together with other applicants based on their competence for available jobs.

He dismissed claims by some leaders that the new management was bringing in employees from Uganda.

He explained that few employees who have been brought on board were working in other Sarrai companies so they are not fresh hirings.

The company has recalled 500 of the former Mumias Sugar workers, especially in the production department.

The new management has admitted that some farmers were reluctant to sell their cane to Mumias due to the sufferings they were subjected to in the past including late payment and debt returns.

“I want to assure the farmers that the company needs more cane and we will be buying directly from them and ensure they profit from the cash crop," he said.

Anglican Church of Kenya Archbishop Jackson Ole Sapit conducted special prayers at the factory on Monday and urged the county and the national government to support local companies and farmers to curb issues of food insecurity.

"We are urging the two levels of government to support farmers by increasing food production even as they subsidise the fertiliser for farmers they should secure a ready market for their produce,” Sapit said.

They said their children have turned to criminal activities due to a lack of jobs.
Counties
3 months ago

Barasa said revival of the sugar company  was critical to the economies in Western counties, especially Kakamega
Counties
3 months ago

Once the company is up and running, it will not only benefit western residents but also the country in general.
Opinion
3 months ago

The Ugandan firm remains locked out of the Mumias sugar.
Counties
4 months ago
Post a comment
WATCH: The latest videos from the Star
by HILTON OTENYO Correspondent, Western Region
Western
27 October 2022 - 22:00
Read The E-Paper