Omulele beat 10 other contestants in the Vihiga speaker race 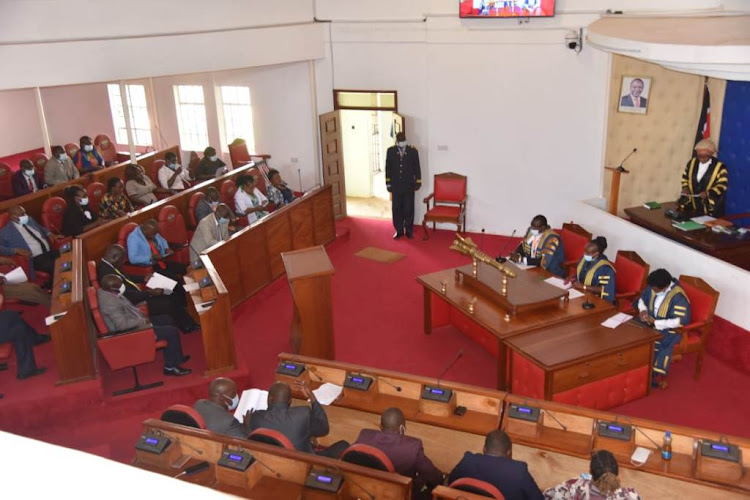 Vihiga speaker Chris Omulele has said he will ensure proper coordination between the assembly and executive.

Omulele promised to take the assembly to the next level.

“The positions we hold, it's not by our choice. It's because God has accepted us and the public has trusted us with those positions,” he said.

“We must serve the public with dignity and ensure their expectations are met. Yes, we can’t achieve them all but let us work as a team to deliver.”

Omulele spoke after he clinched the seat on Wednesday. He will serve as the third Vihiga speaker.

Omulele takes over from Hasna Mudeizi, who served the second assembly from 2017 to 2022.

Mudeizi took over from Dan Chitwa, who was the first Vihiga speaker.

Omulele emerged the winner in the second round of voting with 22 votes against Hillary Adolwa's 14.

In the first round of voting, there were 11 candidates. Omulele got 13 votes, Adolwa 12, Winnie Majani seven, Briton Orlando three while Castro Lubanga got one vote.

No candidate met the threshold to be declared winner, forcing a second round of voting, where Omulele emerged the winner.

“As the speaker, I will ensure the House plays its oversight and legislation roles in accordance with the Constitution. I will ensure that I am the best trustee to Vihiga people,” Omulele said.

“I will also ensure cordial relations between the house and the executive for the sake of development in Vihiga.”

Mudeizi urged the incoming speaker to serve all people equally and unite MCAs for Vihiga to move forward.

“I will be there for you in case of any challenge, advice or support. Please reach out and I will hold your hand where possible,” he said.

Mwambire garnered 37 out of 51 votes during the Tuesday's election.
News
1 week ago

Nakuleu becomes the third speaker of the Turkana County Assembly.
News
1 week ago

Governors are mandated to gazette the first sitting during which MCAs are sworn in
News
2 weeks ago
Post a comment
WATCH: The latest videos from the Star
by MARTIN OMBIMA @OmbimaPatrick
Western
22 September 2022 - 22:00
Read The E-Paper