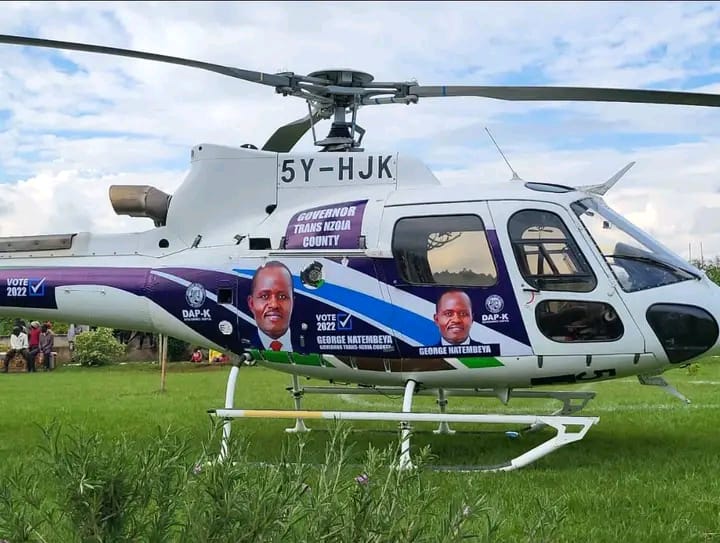 Trans Nzoia gubernatorial candidate George Natembeya has turned to the use of a chopper to criss-cross the county as the hunt for votes nears the end.

Official campaigns end on Saturday ahead of next week's general election.

As such, candidates are working extra hard to cover more ground to reach potential voters.

“We have decided to use the chopper which makes it easier to reach some places that vehicles cannot access. My ground mobilisation teams are also reaching as many people as possible," Natembeya told the Star.

He said he had also mobilised his teams to conduct door-to-door campaigns from villages to towns in search of votes.

"Our county and subcounty campaign teams are also carrying out house-to-house meetings which I believe will yield fruits of liberation," he said.

Natembeya is running on the DAP-K ticket. His closest rival is Kiminini MP Chris Wamalwa who is flying the Kenya Kwanza flag under the Ford Kenya.

DAP-K is an affiliate of the Azimio la Umoja-One  Kenya Coalition.

He cited his Ukombozi centre in the upper Milimani estate for bolstering his campaigns in the county.

CS Wamalwa asked residents to turn up in large numbers and vote for Raila, Natembeya and all Azimio candidates.

He challenged all those who had not made up their minds to vote for Raila to make a decision because even the opinion polls indicate he is going to win.

The opinion polls, he said had also shown that the former Rift Valley regional commissioner is poised to win the governor seat.

The governor says the CS frustrated most county projects when he was Devolution minister.
Counties
2 weeks ago

CS Matiang'i addressed the endorsement ceremony through a phone call.
Counties
2 weeks ago

The vandalized billboards, he said, were put up by mama mbogas and boda boda riders supporting him.
Counties
1 week ago
“WATCH: The latest videos from the Star”
by DAVID MUSUNDI
Western
04 August 2022 - 22:00