NOT A MATTER OF LIFE AND DEATH

Urges residents to remain united even when provoked.

• Natembeya said Trans Nzoia had been left behind due to poor leadership.

• Natembeya pledged to transform the devolved unit if he is elected to succeed Governor Patrick Khaemba. 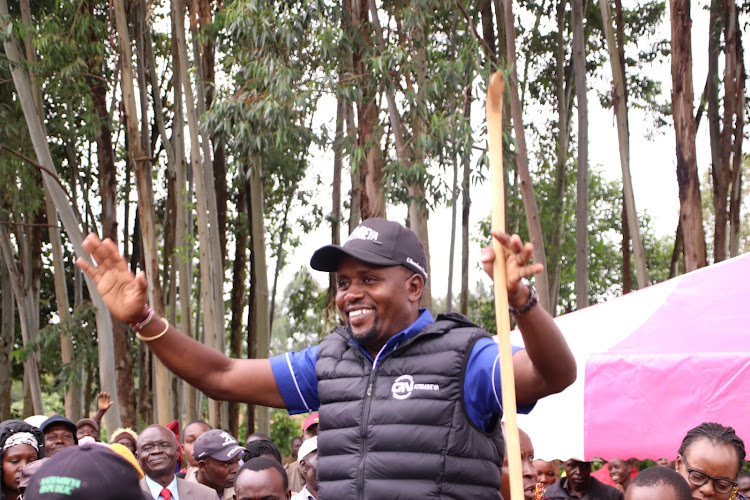 Trans Nzoia governor candidate George Natembeya has asked voters to maintain peace during and after next week's election.

He cautioned politicians against incitement and instilling fear in voters, saying such tactics have no space in a democratic society like Kenya.

"My people, you shouldn’t allow yourselves to fall into traps of disgruntled politicians out to fuel violence. Refuse to listen to these kinds of political theatrics," Natembeya said.

The former Rift Valley regional commissioner reminded residents that there is time for everything and politics should not be treated as a matter of life and death.

He said residents should remain united even when provoked.

Natembeya said Trans Nzoia had been left behind due to poor leadership.

"Other administrative units have done so much for their people by putting devolved funds into prudent use. Trans Nzoia is yet to start its first year in devolution," he said.

Natembeya pledged to transform the devolved unit if he is elected to succeed Governor Patrick Khaemba.

DAP-K senator candidate Joshua Werunga said his first priority will be to resettle squatters in all the five subcounties.

He said he will petition the Senate to allow setting aside of funds to buy land idle belonging to state corporations like Agriculture Development Corporation.

Werunga told Deputy President William Ruto and his running mate Rigathi Gachagua not to whip up tribal emotions to attract votes from Kenyans.

"I saw UDA presidential candidate William Ruto shedding crocodile tears to whip up tribal support. Your tears, threats and intimidations will not translate into votes," he said.

"Support Azimio team led by our captain and presidential candidate Raila Odinga and governor's George Natembeya. We are up to the task and we will move Kenya to the next level," he said.

"It is unfortunate that some people have the guts to stand before Kenyans and tell lies about these projects," he said
News
3 weeks ago

He lauded the model as the best in uplifting the living standards of the poor.
News
3 months ago

The governor aspirant expressed concerns on the remarks made by politicians from across the political divide
Counties
4 months ago
“WATCH: The latest videos from the Star”

Urges residents to remain united even when provoked.
Counties
2 weeks ago
by DAVID MUSUNDI
Western
03 August 2022 - 22:00
Read The E-Paper