Supporter of ODM candidate Ochillo Ayacko attacked by suspected supporters of Pesa over placement of banner at his premises. 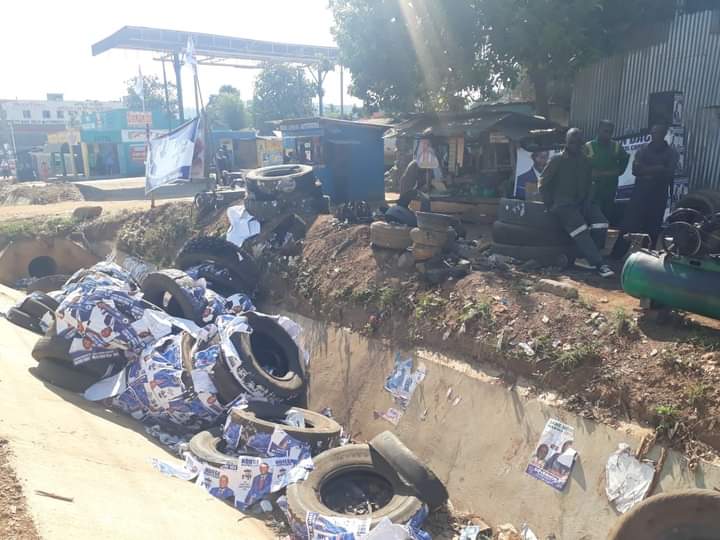 Police in Migori are on high alert following reports of vandalism of campaign materials and violent clashes of supporters during the campaigns.

Several candidates have reported cases of vandalism amid blame games by opponents.

Migori county police commander Mark Wanjala has called on restraint from politicians and their supporters to avert destruction of materials in campaigns that have generally been peaceful so far.

“We have already placed on notice several notorious politicians and rivals that we are on high alert and anybody found culpable will be arrested and arraigned,” Wanjala said.

He warned those who are out to destroy other people's posters that the law will catch up with them and they will be soon arrested and charged in the court of law under the Election Offences act that all aspirants must adhere to.

On Saturday, a supporter of ODM candidate Ochillo Ayacko was attacked by suspected supporters of Pesa over placement of banner at his premises and was rushed to hospital after suffering from panga wounds.

“We have arrested several youths and are still investigating incidents,” Wakuloba said.

Ayacko said campaigns across Migori have been peaceful but some rivals had resorted to political hooliganism and violence for fear of losing in the next polls.

“I have called on my supporters to maintain the restraint we have seen so far. We have been leading the pact on issue- and agenda-based campaigns. This will not be derailed,” Ayacko said at Mwache Primary School in Suna East on Sunday during a campaign rally.

Pesa in a earlier press interview termed the attacks as unfortunate and said only Migori voters will decide their leaders at the ballot.

“We want police to ensure that youths are  not used to cause chaos in this election. We want peaceful campaigns, which we have seen so far in the county,” Kwaga said while addressing supporters on Sunday at Korondo village.

Across the county, campaigns have been more peaceful compared to past polls where Migori had been flagged as a hotspot area thanks to effort from civil society and politicians.

“We had sparodic violence during party primaries, but so far the campaigns have been peaceful and we will work closely with security and candidates to maintain peace," Omole Opinya, an activist with Rapado in Migori town, said.