•The commission has been on the high radar since identifying 33 counties as possible hotspots for violence ahead of the elections.

•According to a report released by the commission, the counties have been marked as high-risk areas, with the possibility of suffering elections-related violence being very high. 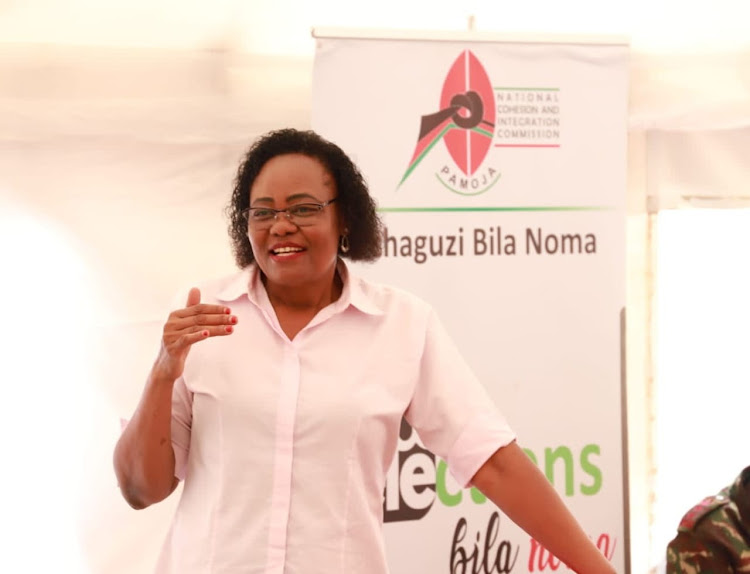 The NCIC will hold a meeting with all presidential candidates and have them commit to peaceful campaigns ahead of the elections.

The commission will press the contenders to commit to accepting election results, commissioner Dorcas Kedogo has said.

Kedogo said the National Cohesion and Integration Commission was working on political decency.

She said an accountability charter will be signed by all politicians and stakeholders as part of their commitment to peaceful electioneering.

“The meeting will have all presidential aspirants tell the nation that they are ready to accept the results of a fair and just election,” Kedogo said.

She spoke in Vihiga over the weekend

The commission has been on the high radar since identifying 33 counties as possible hotspots for violence ahead of the elections.

According to a report released by the commission, the counties have been marked as high-risk areas, with the possibility of suffering elections-related violence being very high.

Kedogo said NCIC was still battling incitement statements among the politicians during this campaign period.

The commission back in April had issued a ban on certain jargon that was considered to incite full sentiments and is still dominating the political space.

The words in Swahili include Kaffir (derived from the Arabic term Kafir which means disbeliever or one who conceals the truth), madoadoa (dots), chunga kura (secure the vote), mende (cockroach ), watu wa kurusha mawe (people who throw stones).

Others were watajua hawajui (they will know that they do not know), wabara waende kwao (people from off the coast should go back to their homes), wakuja (those that come), Chinja Kafir (kill the infidel) and kwekwe (weeds).

Sheng words which have been flagged include Kama noma ni noma (If it is bad, then it is bad), Hatupangwingwi (No one can arrange us) and Operation Linda Kura (secure the vote).

The commission had listed the words claiming continuous usage of such words might lead to chaos-based on how the wording might be interpreted by individuals.

However, the commission admitted that it cannot implement the ban due to a lack of concrete policies.

“We saw that some of these words were hate speech terms whose continued usage would lead to violence and that is why we said they would attract consequences from the commission,” she said.

She said some of the slogans used by the major political camps might cause some problems​​ to Kenyans.

“Top on the list is the popular "hatupangwingwi" slogan,” she said.

The commission however said the use of the slogans has gone down despite them still being in use.

The ban was initiated two months ago.

NCIC director Millicent Okatch said the commission is closely monitoring the regions and that they have launched several peace initiatives.

The director said the commission has a framework to ensure that peace is maintained throughout the electioneering period.

“We have covered 12 counties among the 33 listed ones. We launched county engagements with general stakeholders and we have been sensitising them to the need for peaceful elections,” Okatch said.

Commission has for the last four years been hosting an annual national workshop for youth.
Counties
3 months ago

The forum aimed at appreciating the community's role in peace process.
News
3 months ago