Mudavadi called on state to stop using its security administration to harass members of the alliance.

•Led by ANC Party Leader Musalia Mudavadi, the leaders who were on a campaign trail in the Western region asked the Government to first withdraw State vehicles assigned to Azimio presidential candidate Raila Odinga.

•At the same time, Mudavadi called on the Government to stop using its security officers to harass members of the alliance. 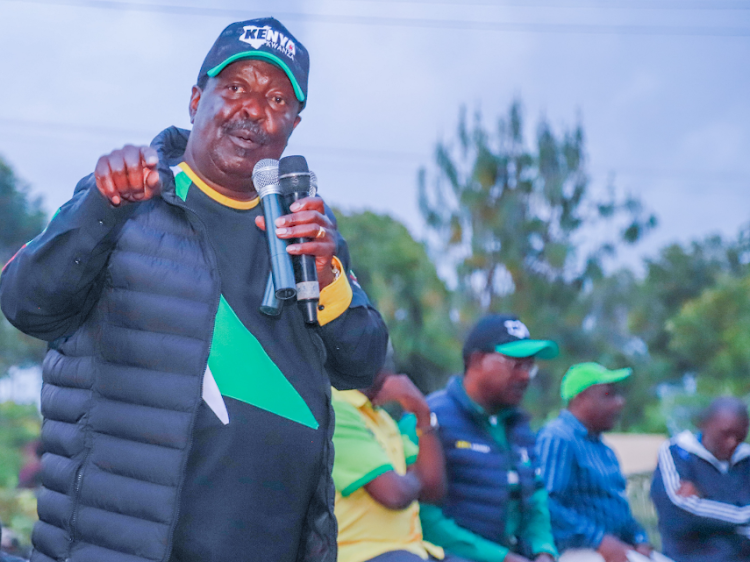 Leaders of the Kenya Kwanza Alliance have asked the Government to stop intimidation tactics on top members of the alliance and parties ahead of the August 9, elections.

Reacting a day after the police announced that they were in pursuit of Kimilili MP Didmas Barasa on claims of using CDF vehicles for his campaigns, the leaders vowed to resist any intimidation threats targeting the alliance leaders.

Led by ANC Party Leader Musalia Mudavadi, the leaders who were on a campaign trail in the Western region asked the Government to first withdraw State vehicles assigned to Azimio presidential candidate Raila Odinga.

At the same time, Mudavadi called on the Government to stop using its security officers to harass members of the alliance.

Speaking during the second day of the alliance’s campaign trail of the region, Mudavadi said no amount of State machinery would slow down the alliance’s activities.

“The Government should stop the intimidation tactics it’s trying to use on our leaders and top party officials,” he said.

Accompanied by Ford Kenya Leader Moses Wetang’ula, Senate Speaker Kenneth Lusaka, MPs Didmas Barasa, Benjamin Washiali and a number of candidates under the alliance, Mudavadi noted that the interests of the Luhya community were safe under the alliance.

The ANC leader noted that in the spirit of transparency and accountability, the alliance had made public its signed agreement between its three major political parties.

Mudavadi noted that in the Azimio coalition, the Luhya community is not represented on the ‘cake sharing table’ and asked the people to demand to be told what is in store for the region.

He noted that the alliance is committed to ensuring Ruto wins in round one so that the country is saved from the burden of a run-off.

“We want to leave no one behind,” he said adding that the Luhya community has no consideration in the Azimio line-up that is led by its presidential candidate Raila Odinga and patron President Uhuru Kenyatta.

Tearing into the Raila Odinga candidature, Mudavadi pointed out that the Azimio candidate is on record that he will follow in the President Uhuru Kenyatta's governance footsteps, which he said had divided the nation and improvised other regions economically.

The ANC leader wondered why Uhuru Kenyatta was determined to have the community back the Raila candidature while his entire region and the leadership from his own constituency is firmly grounded in Kenya Kwanza.

Wetang’ula noted that the alliance will not be cowed by the threats of arrests of its leaders, noting that before the State goes for the Kimilili MP, it should first arrest Cabinet secretaries involved in campaigns and withdraw Raila vehicles.

“My brother Didmas, don’t be cowed or intimidated, we shall stand by you and demand they first arrest those Cabinet secretaries and withdraw their cars and those used by Raila,” he said.

“Musalia and I mean well for the community. Let no one cheat you that he has the interest of the community at heart more than the two of us have. I am angling for you (Western region). I am satisfied with my Senate role, and in Kenya Kwanza, we are after the interests of the region and not personal gain,” said Wetang’ula.

He said the time for the Luhya nation to be taken for a ride and treated as a stepping stone by Raila was over.

He called on the community to fully support the alliance.

Mudavadi also lashed out at Uhuru for being selective in fighting corruption.
News
1 month ago

Mudavadi and Wetang'ula termed the move as hypocrisy and out to weaken Ruto.
Counties
1 month ago
WATCH: The latest videos from the Star
by MARTIN OMBIMA @OmbimaPatrick
Western
27 May 2022 - 00:25