He says his rival does not have an agenda to sell to the electorate. 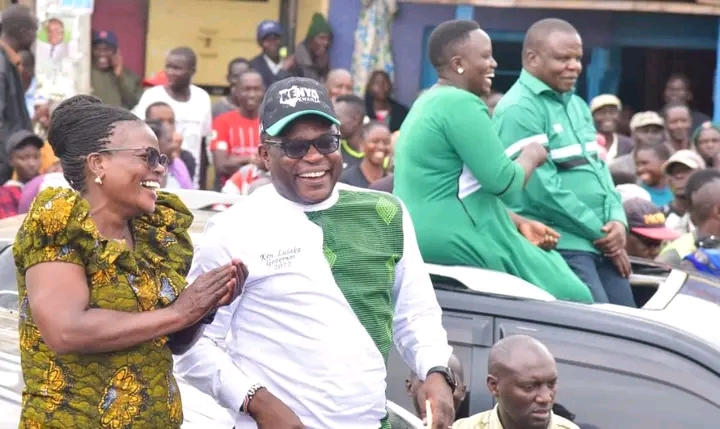 Bungoma governor aspirant Ken Lusaka during a rally in the county on May, 25, 2022.
Image: TONY WAFULA

Speaking on Wednesday in Sirisia constituency during Kenya Kwanza campaigns, Lusaka said his rival does not have an agenda to sell to the electorate.

He promised to install security lights in all Bungoma markets so that the county has a 24-hour economy.

“I have gone around the county and realised the security lights that I installed while I was the governor here have been destroyed and the current administration has never bothered to replace them," Lusaka said.

"That is negligence of the highest order. Let's remove Wangamati in office and change the economy of this county.”

Lusaka served as the first governor of Bungoma between 2013 and 2017 when he lost to Wangamati.

He is now seeking to reclaim the seat in the forthcoming election.

Lusaka explained his decision to pick Jennifer Mbatiany from Mt Elgon as his running mate, saying  women had been forgotten in leadership positions.

“I did not just wake up one day and pick Jennifer as my running mate. I did wide consultations before making my final decision and I also know her as an industrious woman who will push our agenda here in Bungoma,” he said.

Lusaka said Wangamati-Nangalama ticket won’t threaten him, adding that when he was the governor Bungoma used to be among the best performing counties with an allocation of Sh6 billion.

“This time round the allocation to counties increased but if you can compare what I was able to do during my regime as the governor there is a big difference," he said.

"I want to assure that with the Sh12 billion that will be allocated to counties, I will be able to do much.”

“Reject leaders in the Azimio team. Sincerely speaking Wangamati does not have an agenda to move Bungoma to the next level. Bungoma needs a focused leader,” he said.

Lusaka said he will prioritise water, education and return the trade loan so that small businesses can get loans and grants to uplift their business.

On county scholarship, Lusaka said his administration will not separate bright and average students, assuring that he will support all of them to get bursaries.

The aspirant said he was also on the forefront to ask President Uhuru Kenyatta for the construction of Chwele-Lwakhakha road that is now tarmacked.

“Make sure that DP William Ruto clinches this top job so that I can have the courage to ask him for bigger things. Mulembe nation will benefit a lot if Ruto becomes president,” Lusaka said.

Echoing his sentiments, Mbatiany lauded Lusaka for considering her for the position, saying she will support him (Lusaka) deliver to Bungoma.

Rematch in Bungoma as Wangamati faces off with Lusaka

Political commentators say poll will be a battle beyond the two,with other forces taking centre stage
Counties
1 month ago

He says if passed, it stands to give farmers more say in management of sugar factories.
Counties
1 month ago

Say residents should reject leaders who dine with Kenya Kwanza during the day and Azimio by night.
Counties
1 month ago
“WATCH: The latest videos from the Star”
by TONY WAFULA
Western
26 May 2022 - 22:00