Bungoma ODM aspirants get certificates in readiness for polls 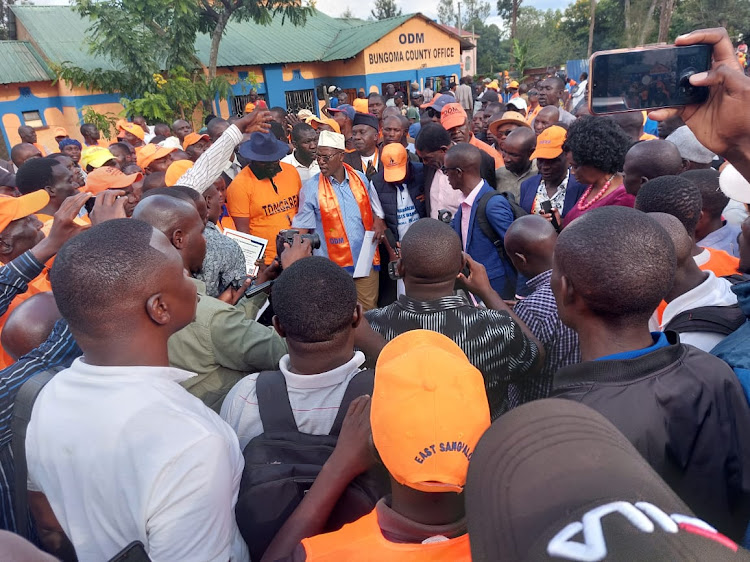 ODM aspirants in Bungoma were on Monday awarded certificates in readiness for the August polls.

In an interview with the press in Bungoma town, Sirisia MP aspirant Moses Nandalwe said he was optimistic of unseating the incumbent MP John Waluke who ditched Ruto's camp and joined the Jubilee Party in the Azimio la Umoja One Kenya alliance.

"I have no competitor in these coming polls because whatever I have done on the ground speaks for itself and I am going to ensure that I bag this thing by 8am in the morning," he said.

Nandalwe added that if given the chance to be the MP he would do much to ensure that Sirisia people enjoy having a youthful leader.

He said Sirisia needs a youthful, vibrant and visionary leader who will change the face of the constituency.

"With the little experience I have gotten from the positions I have held in offices, the whole constituency is aware of my work," Nandalwe said.

Nandalwe assured that if given the chance to be the MP he would focus on education, clean water, youth and women empowerment and support agriculture.

The politician urged Bungoma residents and Western region at large to support Azimio la Umoja presidential hopeful Raila Odinga to clinch the seat so that he can bring development to the region.

"Let’s support Raila Odinga because he is the father of development, peace and unity in Kenya," he said.

Nandalwe urged politicians who have overstayed in one position for a long time to move on and pave the way for young and vibrant leaders who can deliver.

He said that he will start his campaigns within the constituency to urge residents to vote for him in the August polls, adding that he has been in the race since 2013 and that it's his time to lead.

On his part, Bungoma county ODM chairman Ali Majani urged residents to vote for the Azimio la Umoja MPs so that Raila Odinga can have an easy time when executing his head of state roles.

“We want to give Raila Odinga an easy time when he becomes our president. We don't want him to have tough times in the State House. The only easy way to give him ample time is to give him ODM MPs,” Majani said.

He added that ODM party has fielded candidates in all the nine constituencies in Bungoma, Senate, women representative and MCAs except that of the governor where the party is backing Governor Wycliffe Wangamati.

He assured that soon the ODM leader will tour Bungoma county to tell the residents his agenda and what he will do for the region if elected the president.

“We are planning for a mega rally here in Bungoma. Soon Baba will visit Bungoma and we will have time to talk to him,” he said.