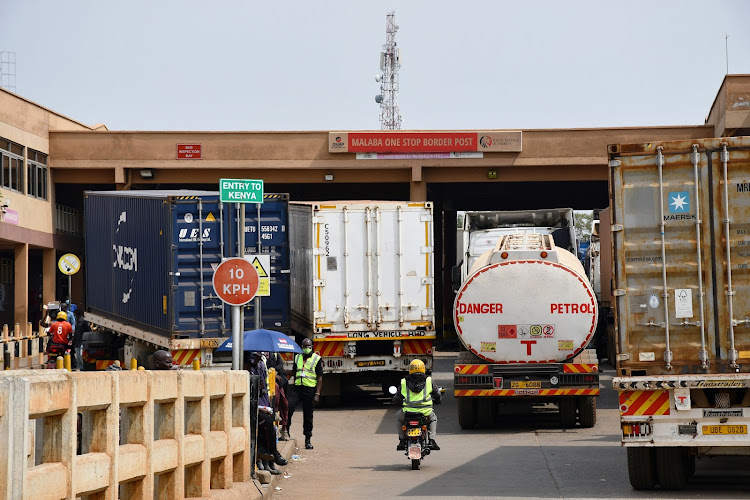 SCARCITY A fuel tanker and other cargo trucks at the Malaba border.
Image: EMOJONG OSERE

Motorists from Uganda are crossing the border into Kenya in Malaba and Busia to buy petrol and diesel as fuel prices remain high in the landlocked country.

The development is a new turn of events since, mostly, it is Kenyan motorists and boda boda riders who have been crossing into Uganda to buy the product because of the high fuel prices in Kenya.

Fuel prices in Uganda have hit a record high in the last three weeks following a shortage of the product.

The Ugandan government has been accusing private fuel dealers of hoarding the product creating a shortage that led to the increase in price.

A litre of petrol in Malaba, Uganda, currently retails at between Sh160 and Sh163 depending on where one buys it from, while diesel is being sold at Sh145.

Some Ugandan motorists travelling from as far as Kampala to the border are also taking advantage of the lower fuel prices in Kenya to buy the product on the Kenyan side of the border.

On Tuesday morning, a litre of petrol at filling stations in Malaba, Kenya, was being sold at an average price of Sh131, while diesel was approximately retailing at Sh112 a litre.

During the meeting,it was agreed that the clearance of fuel tankers will be enhanced to offset the fuel shortage presently being experience in Uganda.

The meeting was attended by Uganda’s State Minister for Trade Harriet Ntabazi, customs officials from both Kenya and Uganda, officers from the Kenya and Uganda Revenue Authorities, as well as border port health officials.

Uganda began experiencing fuel shortage when truckers went on strike on January 3 as they protested the introduction of a Sh3,600 Covid-19 testing fee slapped on them by Uganda.

The strike halted the clearance of cargo trucks at the Malaba border.

Cross-border movement only resumed 11 days later when the strike was called off.

The Saturday meeting between Macharia and the Ugandan delegation pegged Wednesday as deadline for clearing the cargo trucks backlog in Malaba.

Since Saturday, there has been steady movement of the trucks across the border for the regional ministerial directive to suspend the scanning of the trucks which the two countries agreed had led to the gridlock at the border.

Ntabazi said on Saturday that with the suspension of cargo scanning in Malaba, Kenya, the movement of fuel trucks will be enhanced. This, she said, will lead to a drop in the price of fuel in Uganda.

“We are appealing to all fuel and truck operators who are carrying fuel everywhere. We have put a target of Wednesday. By Wednesday all trucks would have entered the country and there will be no need for fuel dealers to hike fuel prices because there will be enough of it,” she said.

He, however, said the number of fuel trucks being cleared at the two borders has increased to at least 250 per day.

The last time Kenyans bought fuel in Uganda because of high product prices was in September last year.

Neighbouring Uganda then was selling most fuel products at prices lower than those in Kenya.

Petrol in Uganda then retailed at Sh110 a litre, Sh30 lower than the retail price in most petrol stations along the Kenya-Uganda border.