By last week, the traffic jam by cargo trucks stretched for over 70 kilometres 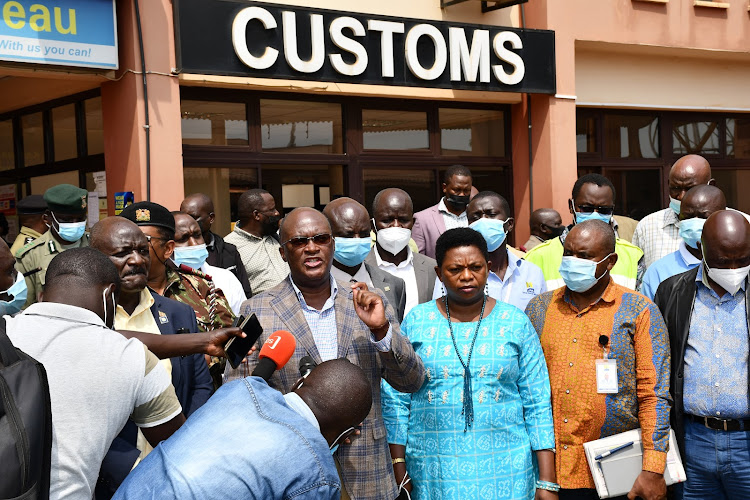 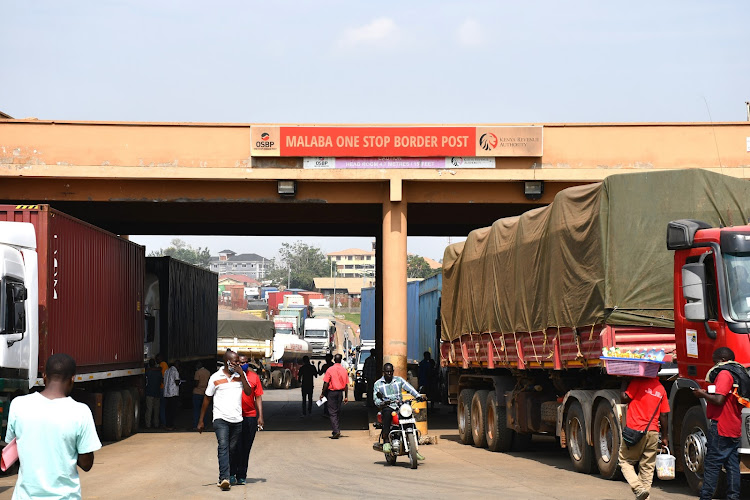 BORDER: The Malaba One Stop Border Post in this picture taken on January 22, 2022.
Image: EMOJONG OSERE

Kenya and Uganda have suspended scanning of cargo trucks at Malaba border as the two countries move to clear a 40-kilometres traffic snarl-up along the Malaba-Bungoma highway.

The suspension followed a meeting between Transport Cabinet Secretary James Macharia and his Ugandan counterpart Katumba Wamala and Uganda’s State Minister for Trade Harriet Ntabazi in Malaba on Saturday.

The ministers held a two-hour meeting after which it was agreed that scanning of cargo trucks on the Kenyan side of the border be suspended immediately.

Scanning will only be done on the Ugandan side of the border.

The suspension is expected to increase the rate at which cargo trucks are cleared in Malaba, Kenya.

The ministers agreed that scanning of cargo on both sides of the border was a major factor that had contributed to slowed cargo clearance hence the backlog.

There is currently a long queue of cargo trucks stretching for approximately 40km along the Malaba-Bungoma highway.

Truck drivers have been complaining of a slow rate at which cargo trucks are cleared at the border.

The ministers said with the suspension of scanning in Malaba, the current snarl-up will be cleared by Wednesday.

“We have met the customs officers and officials concerned with health as well as immigration. We want this backlog to be out of the way by Wednesday. From the Kenya side, the scanning will not be done because that has been part of the problem,” Wamala said.

“Scanning will be done in Uganda before the vehicles can proceed. We have also agreed that the verification, which was being done in the yard in Malaba, Uganda will no longer be done here. It will be done at ODJ Holding ground.”

“We have agreed that because the clog is so much on the Kenyan side, we are going to give priority in terms of movement of trucks as they come this side of Uganda. Testing of truck drivers for Covid-19 will be done after 14 days.”

Macharia said the backlog at the border was a major concern for the two countries since it negatively impacted on trade and health sectors in Kenya and Uganda.

The CS said clearance of the backlog will be given priority as Kenya and Uganda continue to bolster trade ties.

“It has been a major concern for us that we have been meeting as ministers East African Community level, transport level and health level for the last two to three weeks virtually but those meetings did not yield fruit. This time it was decided that we come here in person to make sure we see what is going on in Malaba,” the CS said. 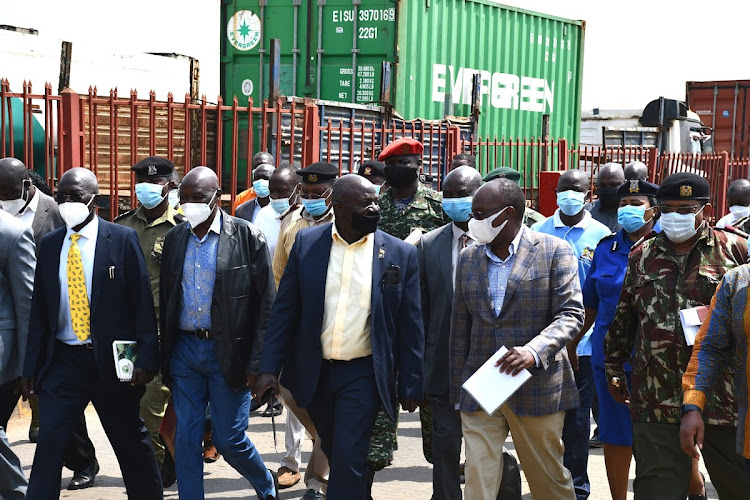 “The key thing is to make sure the adverse impact of this backlog ceases to be within the next few days. It has impacted on health because you can see trucks lining up to 70kms and there are health issues created by them.”

Malaba border, since 2022 began has grappled to clear cargo trucks’ backlog that began when truckers went on strike on January 3 to protest the introduction of a Sh3,600 fee they were required to pay before being tested for Covid-19 in Uganda.

The strike lasted for 11 days.

Despite calling off of the strike and the resumption of normal border operations, the traffic jam by cargo trucks has persisted.

By the time the truckers’ strike ended, the snarl-up stretched 70 kilometres.

“By Wednesday, we want this backlog to be cleared permanently that is why we are taking hardcore decisions like suspending the weighbridges, suspending the scanning and increasing the labour force at the border,” Macharia said.

“We want to make sure those issues are addressed and also the softer issues where complaints have been made that there has been mistreatment of drivers on both sides.”

Among other resolutions agreed at the meeting is increasing the number of health personnel at the border to test the drivers for Covid-19.

Uganda is expected to increase the number of her health personnel from 50 to 100.

Kenya on the other hand will introduce rapid testing for Covid-19. Results for rapid tests are issued almost instantly.

The ministers, after the meeting directed security agencies in both countries to investigate incidents of mistreatment of truck drivers and report such cases without delay.

Ntabazi said with the suspension of scanning, the movement of fuel trucks will be enhanced. This, she said, will lead to a drop in the price of fuel in the landlocked country.

“We are appealing to all fuel and truck operators who are carrying fuel everywhere. We have put a target of Wednesday. By Wednesday all trucks would have entered the country and there will be no need for fuel dealers to hike fuel prices because there will be enough of it,” she said.

A litre of petrol in Kampala currently retails at Sh200.

He, however, said the number of fuel trucks being cleared at the two borders has increased to at least 250 per day.

They want the charges entirely scrapped before they can resume normal operations.
News
1 year ago

Covid-19 testing stepped up at Malaba as traffic stretches 70km

Stakeholders in the transport sector blame slow Covid-19 testing for the traffic jam.
Counties
1 year ago
Post a comment
WATCH: The latest videos from the Star
by EMOJONG OSERE Correspondent, Busia
Western
23 January 2022 - 22:00
Read The E-Paper