MP seat too small for you, Emase teases Governor Ojaamong

Former legislator says Busia boss should either vie for President or try his luck at the Senate. 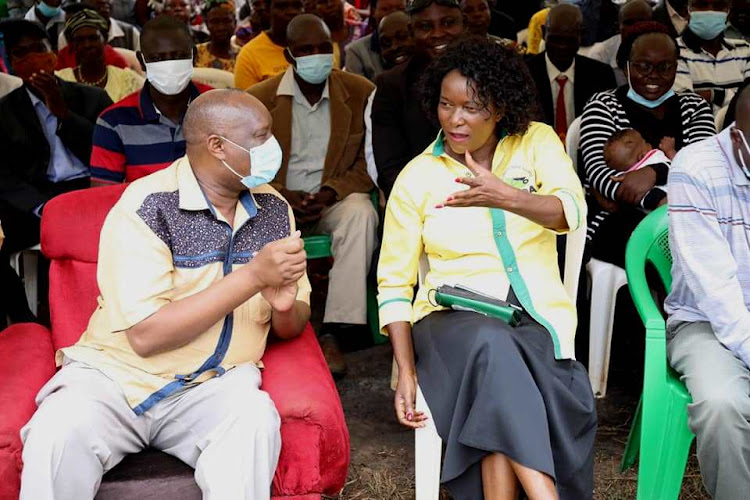 The two on Saturday met at a burial in the constituency as they continued to popularise their candidature for the seat currently held by ODM’s Geoffrey Omuse.

Ojaamong, who is serving his second and final term as governor, and Emase are keen on ousting Omuse from the seat during the August 9 polls.

On Saturday, Emase reignited her rivalry with the former Amagoro MP telling him the MP seat is “too small” for him.

Emase has consistently told Ojaamong to vie for any other political post but not MP or MCA.

The two seats, the former lawmaker says, are “too small” for Ojaamong who served as Amagoro MP for two terms before ascending to the governorship.

The leaders were attending the burial of businessman Francis Owino, 65, at Kaliwa village in Amukura Central ward in Teso South subcounty.

“Governor Ojaamong, I have a lot of respect for you. Leave this business of vying for small seats. Focus far,” Emase said amid applause.

“Ordinarily, all of us want to move up the ladder; for example moving from a semi-permanent house to a permanent house, or getting promoted from a senior teacher to a head teacher.”

Ojaamong has expressed interest in the Teso South MP seat.

His interest in the seat has, however, elicited mixed reactions across the constituency as voters remain divided over whether the governor should return to the constituency to serve as MP after leading the county with a population of close to one million residents.

The Constitution does not bar people who have served as governor from contesting for positions of president, senator, woman representative, MP or MCA.

The governor is campaigning on claims that he helped build schools, hospitals and other social infrastructure in Teso South when he served as MP, to try convince residents of the border constituency to back his MP bid.

He also argues that a lot of development was initiated in Teso South during his tenure as governor.

He has consistently claimed Emase’s development record does not match his when he served as MP.

He said in May that Emase failed in her mandate as Teso South MP since she did not help in the development of schools, hospitals and roads.

On Saturday, however, Ojaamong did not respond to Emase’s push that he shelves his plans to vie for the Teso South MP seat.

The governor instead drummed up support for ODM leader Raila Odinga’s presidential bid.

He said with Raila’s presidency, more development projects will be initiated in Busia, more so if he is elected MP.

He argues that his close association with Raila will immensely benefit Teso South residents.

Emase has declared she will be in the race to recapture the seat she lost in 2017 on Deputy President William Ruto’s UDA party.

She says she will not campaign for ODM Raila Odinga unless he declares the development projects he has helped initiate in the county.

“Politics is about interest. I want us the people of Teso South to refuse to cast votes that go to waste,” she said.

The MP has hosted Ruto in Busia three times in less than three months between October last year and January.