CSs Eugene, Munya say they have right to engage in politics

• Eugene says there is a reason Parliament exempted Cabinet secretaries from political neutrality.

• The CS says there is a thin line between politics and policy that most people don't know. 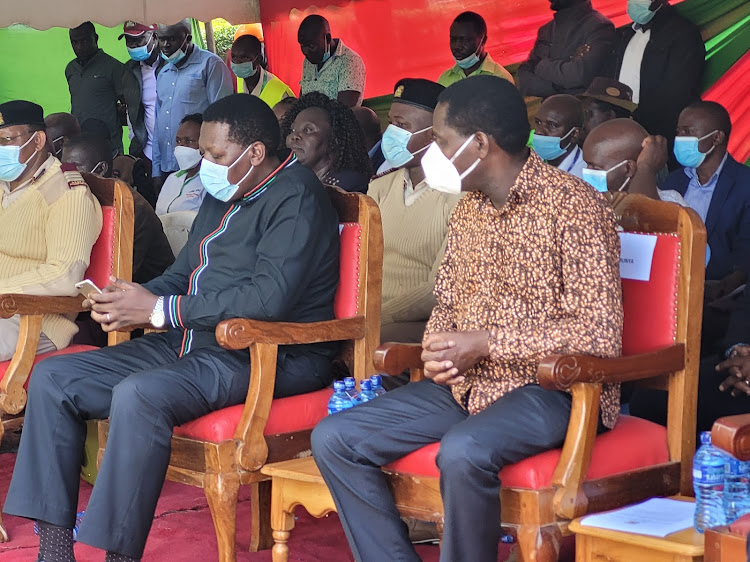 Two Cabinet secretaries have rubbished calls by a section of leaders allied to Deputy President William Ruto to stop engaging in politics.

Defence CS Eugene Wamalwa and his Agriculture counterpart Peter Munya yesterday said they will not be intimidated by anyone.

The leaders spoke Monday at the Nzoia Sugar factory.

Eugene said there is a reason Parliament exempted Cabinet secretaries from political neutrality.

"If you look at Article 23 of the Leadership and Integrity Act, all county and national government staff are not supposed to engage in politics, except the ministers," he said.

Eugene said the law says so because as ministers they are the handymen of the President.

"I implement and ensure that the President's manifesto is met at the ruling party and I have to walk across the country informing the electorate," he said.

The CS said there is a thin line between politics and policy that most people don't know. He said CSs are political appointees who serve towards fulfilling political agendas.

"We came here with the President and you gave us spears to begin this journey together and we shall. The President said he wants to unite the country for it to be one country without graft and tribalism, and he has never wavered from that agenda."

He asked leaders not to incite residents against each other.

"We heard the other day that our deputy president was heckled by rowdy youths, which was not a good thing," Eugene said.

He said CSs have been serving residents well and should be allowed to engage in politics.

"We do not want the politics of violence in this country. Let everyone who wants to be president be given an opportunity to sell their manifesto peacefully in our region. When the voting time comes, we shall decide whom we want to be our leaders," he said.

Munya said he will continue to spearhead the President's agenda without fear.

He asked other CSs not to be intimidated.

"We want to ensure handshake politics go beyond the 2022 polls and have a united Kenya that is accommodative of everyone," Munya said.

The CS said no one should dare tell him to stay away from politics.

"I also want to tell you, residents of Bungoma, to be part of the handshake government that has united Kenyans," he said.