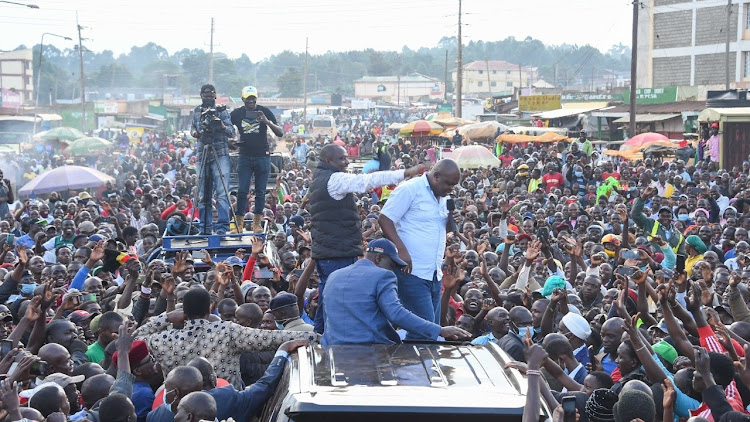 Kabuchai MP Majimbo Kalasinga’s move to host Deputy President William Ruto in Moses Wetang’ula backyard has sparked speculation that the party could be warming up to United Democratic Alliance.

On Friday, he sensationally claimed that they were very much ready to work with Ruto to form the next government.

The MP was addressing a crowd that showed up at Chwele market to listen to Ruto who was transversing the county spreading the 'hustler gospel.'

Kalasinga was elected in March this year on a Ford Kenya party ticket during a by-election after the death of James Mukwe.

"Our beloved DP Ruto let me tell you that you and Bungoma are one thing and we are ready to work with you in your quest to empower the hustlers of this country," Kalasinga said amid cheers from the crowd.

But in a quick rejoinder, Wetangula's personal aide Wafula Wakoli dismissed Kalasinga's claims saying that Ford Kenya was not working with UDA.

"Ford Kenya party has mechanism and structures to do things and the sentiments by Majimbo that he had been sent by our party leader Moses Wetang'ula to tell Deputy President William Ruto that as a party we are supporting his hustler narrative is total lies," Wakoli said.

"We want to say that those sentiments by Majimbo were his own and not those of  the party," he said.

He asked Ford Kenya members to be calm and remain loyal to Wetang'ula who will give them political direction in due course.

"Our party is firm under the able leadership of Wetang'ula and we are working with other leaders of Okoa Kenya to take our people to state house come August next year," he said.

The dismissals come even as pundits opine that the sibling rivalry within Ford Kenya seems to be a blessing in disguise for Ruto's UDA party.

Politicians allied to the DP from Bungoma county have been using the divisions within Ford Kenya to solidify Ruto's support base.

Isaack Wanjekeche, a political analyst, said with the divisions in Ford Kenya, UDA has a chance to completely take over the region.

"In the absence of a strong Ford Kenya, the party that has become popular is UDA because all other key politicians are allied to the party," wanjekeche said.

Ford Kenya is split down the middle, with Wetang’ula leading one faction, while the other wing is led by MPs Wafula Wamunyinyi (Kanduyi) and Eseli Simiyu (Tongaren).

The party split following an attempted 'power grab' in which Wamunyinyi declared himself the party leader.

However, Wetang'ula moved to court and obtained orders stopping his removal, pending hearing and determination of the matter.

The party’s National Executive Council had accused Wetang'ula of gross misconduct and failing to champion unity in the party.

Other charges levelled against Wetang’ula included failing to reconcile warring members to eliminate friction in the party.

Mr Wanjekeche said that the two factions of Ford Kenya may give way to the emergence of other parties in the region.

"Ford Kenya has enjoyed dominance in the region, but I am afraid they might lose it in the coming election courtesy of their protracted sibling rivarly," Wanjekeche said.

Wetang'ula is on record saying those who attempted to remove him as party leader will be punished at the ballot.

He maintained that Ford Kenya is still the most popular party in the region and the next elections will prove this.