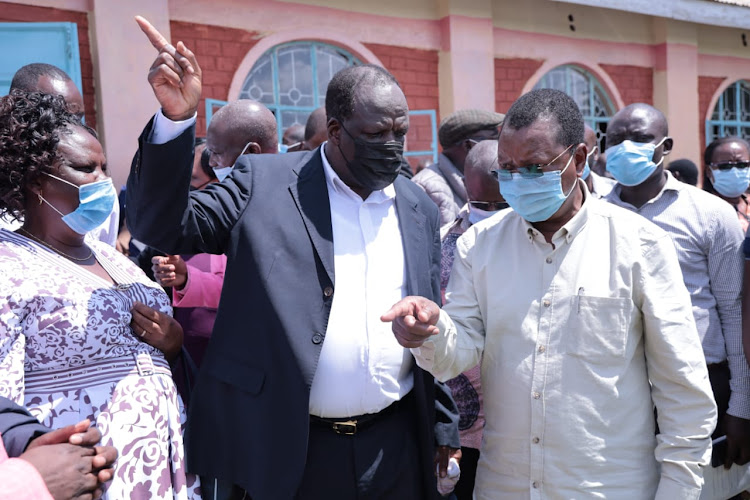 Kakamega's ODM leadership is plagued by a vacuum and squabbles after three officeholders defected to UDA and ANC.

The vacant positions are secretary, organising secretary and treasurer of the county coordinating committee.

Some observers fear an implosion as ODM leader Raila Odinga seeks to consolidate the region.

“The party is in very bad shape. We need a meeting to get the right leadership to steady it. A vacuum is not a good thing, especially in a political party,” Matungu chairman Paul Achayo said.

Party grassroots leaders in the 12 constituencies seem to be reading from different scripts on the party status with barely 11 months to the general election.

Constituency officials have written to the county acting ODM coordinating committee chairman Justus Kizito, who is also the Shinyalu MP. They demanded a meeting of all subcounties to fill the positions and steady the party.

The positions of some officials, however, seem to have changed.

Raila has decided to focus his attention on the region as he prepares for 2022 polls.
News
6 days ago

“I learnt some officials wanted to use the meeting to push their own agenda and thereafter join UDA. Some of us cannot go that direction because our loyalty is to party leader Raila Odinga and his deputy Wycliffe Oparanya,” he said.

Party delegates from the 12 constituencies met at the Golf Hotel in Kakamega town on Friday but failed to fill the vacant positions.

They did, however, remove Kakamega Deputy Governor Philip Kitima as county chairman. He was replaced with Kizito in an acting capacity.

Police dispersed them, citing violation of Covid-19 protocols on distancing and the ban on big gatherings

Achayo said the grassroots leaders’ meeting they are pushing for is important to either reaffirm Kutima or Kizito as chairman and fill the positions.

He said Kutima's removal was illegal because his was one of the seats to be filled.

An ODM top official who asked not to be named told the Star Raila was unhappy with the way the Western leaders and professionals forum was handled.

Grassroots leaders, including MCAs, were not given a chance to speak at the hotel meeting in Kakamega on Friday.

In their letter dated August 21, the officials said the party has an enormous task to regain and rejuvenate its base in Kakamega and Western in general. This followed the end of the Building Bridges Initiative to amend the Constitution.

“Since Kakamega county is the biggest ODM presidential vote basket outside Nairobi, it must be given special attention to deliver even more votes than in the last election," the letter read.

“This calls for unwavering commitment to working with measured progress,” it read.

The local officials said the county coordinating committee should not hoard party activities but work within its mandate and framework of coordination.

The letter was copied to Kakamega Governor Wycliffe Oparanya who is also the deputy ODM party leader, party secretary-general Edwin Sifuna and the ODM National Elections Board.

Navakholo chairman Amos Oyalo said poor party leadership by current officials had cost ODM its grassroots support base and the problem needs to be fixed urgently.

Raila has decided to focus his attention on the region as he prepares for 2022 polls.
News
6 days ago

ODM director of communication Philip Etale said party officials should use the right procedure to resolve differences as there is no time for "dogfights".

“What ODM wants is one united and solid movement in Western, able to deliver on our agenda,” he said.

Kizito could not be reached for comment on the letter as his cellphone was switched off.

Raila is expected to make his fifth attempt at the presidency in 2022. He is undertaking regional visits to consolidate his support and Western is essential.

Western leaders make demands to Raila in exchange for support