More rains for western, drought in eastern Kenya till October 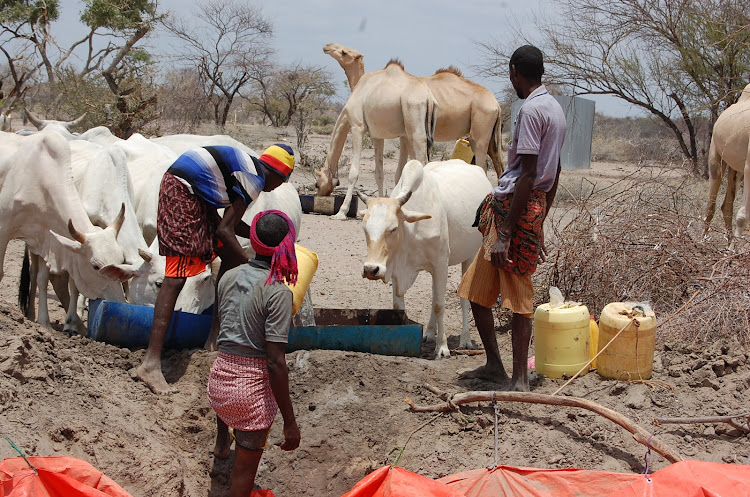 DROUGHT: Headers water their livestock in Garissa, which is experiencing drought.
Image: FILE

Dry weather is expected over most parts of Kenya next month, a condition that could drag on until October, according to a new weather forecast.

The larger eastern Kenya is especially expected to be warmer and dry in the next three month, while western Kenya could be wetter than usual.

The forecast was given by the Igad Climate Prediction and Applications Centre, which is based at Dagoretti-corner in Nairobi.

“Wetter than usual conditions are expected over western Kenya during August and through to October 2021,” Icpac said in a seasonal forecast.

“Eastern Kenya is expected to be drier than usual from August to October 2021.”

The August-September weather is usually mixed, and is traditionally rainy and cold, with a brief dry season beginning end of August till October.

The current forecast means the ongoing drought in northern Kenya will probably only end when the short rains season begins in October.

According to metrological department, most of northen Kenya counties received less than 50 per cent of average long rains amount with most parts of Marsabit, Wajir, Garissa, Isiolo, Kajiado, Tana River and Turkana receiving less than 25 per cent.

According to the UN Food and Agriculture Organisation, Kenya’s drought response plan requires Sh9.4 billion for July to November; Sh5.8 billion for food and safety net support and Sh3.6 billion for non-food assistance.

FAO representative to Kenya Carla Mucavi last week launched an initial Sh1.5 billion appeal in response to a drought alert in June. Twelve of the 23 ASAL counties were in the alert drought phase in June, while 16 reported a declining trend.

“Livelihood has declined due to reduced access to pasture. Fifty-six per cent of the ASAL counties reported increased trekking distances to water sources for livestock and domestic use,” Mucavi said.

“This is expected to worsen in the coming months hence the need for urgent anticipatory action.”

He said the figure is likely to rise as the situation worsens because there is a severe deficit of vegetation in Isiolo and Lagdera subcounty of Garissa.

Mucavi said the plan will cushion livestock assets and vulnerable pastoral households against the drought, support works for increased access to water for livestock and domestic use.