Vast Chwele market dirty, derelict but salvation on the way

County promises to convert market into a modern one serving country and region, double turnover

• Chwele market is a mess, sprawling, filthy, lacking proper roads, facilities, processing facilities, refrigeration ... the list goes on. Traders say they are paying taxes for nothing.

• County agrees it's a disgrace, but says the town and market will soon by transformed into urban and commercial gems thanks to World Bank, Kenya programmes. 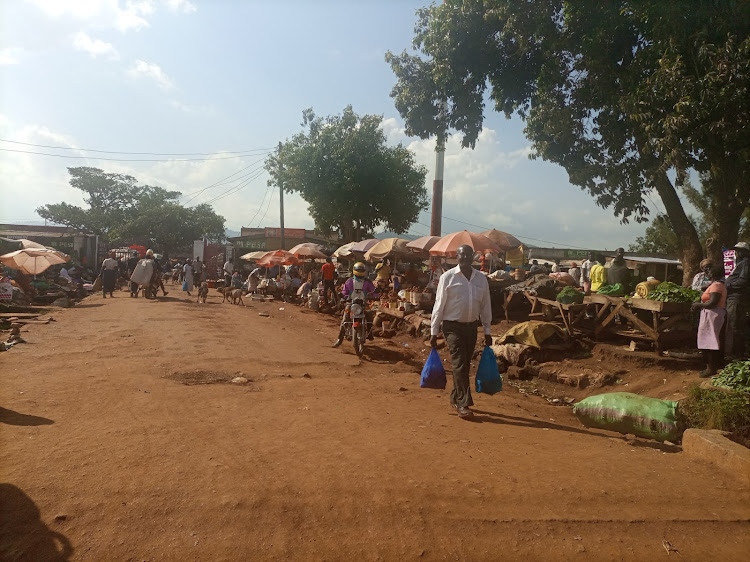 Chwele town has the second-largest open-air market in Kenya with an annual Sh13 billion turnover but it's in dire need of improve to spur economic development.

Its location near the fertile, volcanic soils of Mt Elgon makes it possible for farmers to easily market their produce to buyers from Eastern Uganda, Kampala, Eldoret, Nakuru, Nairobi, Mombasa, Lodwar and Sudan.

Chwele in Bungoma is the Kenya's second largest open-air market after Karatina in Nyeri.

It has great possibilities but traders say they're not get services for their taxes and they say withholding tax would deal a blow to the economy.

But the county says a new world awaits thanks to World Bank grants and Kenya programmes that will turn the deplorable market into a jewel of national and regional commerce.

Meantime, the traders are angry and wonder when the miracle will happen.

Ben Wangila, the chairman of the business community, said the county government has failed to improve infrastructure and the drainage system, despite promising a substantial allocation in FY 2019-20.

"The town has no physical planning , a poor drainage system, poorly maintained roads and a substandard auction ring. We just have a field, not an auction ring, and we wonder why we keep on paying taxes," he said.

The main slaughterhouse is a disgrace despite management by a private company. The chicken slaughterhouse has remained closed, though public resources were spent on the facility.

"Kongowea and Mbale city in Uganda have modern markets but we continue suffering in deplorable conditions in Chwele, Wangila said.

He said the only tarmac road in the fast-growing town was built by Governor Ken Lusaka, now Senate speaker.

The lighting has not been working for three years.

"There are no street lights in this busy town, hurting market functions. Criminals are taking advantage of darkness to to maim businessmen and steal," he said.

Piped water has been a pipe dream since pipes have remained dry.

The Chwele subcounty hospital has never been equipped to handle the growing population.

"There is no minor surgery and X-ray equipment  for the increasing number of residents. When you need referral services, you either go to private hospitals in Bungoma or to the congested Bungoma Referral hospital," Wangila said.

He called on the national and  county government to take security seriously, saying if it fails to do so, businesspeople will paralyse revenue collection.

"The government should improve services by providing proper infrastructure and ensuring security if revenue collection is to improve,' he said.

The market has many insecurity problems, including constant thefts at the market and failure by security companies contracted by the county to pay guards' salaries for a long time.

HELP ON THE WAY

However CEC for trade Gregory Naulikha said the county government will soon ensure proper infrastructure . He said the need for improvement is urgent as the the volume of commodities exchanged at Chwele market is enormous.

He urged development partners to help.

"The total volume of goods and services traded weekly  is estimated at Sh250 million, which translates to an annual turnover of Sh13 billion," he said.

He said the expected volume of trade in metric tonnes  Will increase to 26 billion per year and expected revenue collected by the county will be Sh780 million.

Will Bungoma wait to depend on the exchequer for development with this kind of statistics? Think about the impact of Sh26 billion circulating around one market in Bungoma," he added.

He said the market must be established as a multi-tier regional markets by 2023. It should increase the annual turnover of goods and services by 100 per cent and open it to diverse commodities and traders in Kenya and neighbouring states.

He also promised Matulo Airstrip would be linked by a road and rail network.

Naulikha said completion of the new market will be a legacy of the Wycliffe Wangamati's administration as many household livelihoods will improve.

He said the market will enable the rural poor to move out of poverty through access to high value chains  in markets for goods, services and labour.

Naulikha said the market will be an organised and efficient with a 24-hour economy to revolutionalise trade and generate higher revenues.

The CEC said the Covid-19 pandemic had hampered initial plans to set up a market of international stature.

"It  has thrown some of our plans into disarray but we we're still holding on," Naulikha said.

Bungoma is one of the  counties benefiting from the Kenya Urban Sector Support Programme (Kussp) that will elevate towns to municipalities by improving infrastructure.

He said that the second phase,  Kussp will uplift Chwele and Webuye towns to municipal status.

He said problems holding Chwele back include insufficient warehouses, lack of refrigerated storage facilities, lack of water, lack of processing facilities and lack of access to market information.

"A multi-tier regional market that we will establish as a county government very soon will address all these challenges," Naulikha said.