Twenty-one people claim to own the land and hold titles. Activist Omtatah has sued on behalf of the family 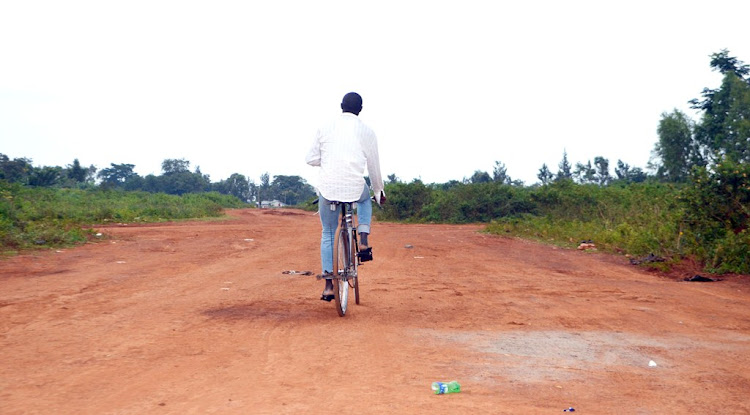 OLD RUNWAY: A man rides a bicycle along what used to be the airstrip's runway.
Image: EMOJONG OSERE

Three sons of a man who donated land for the Busia Airstrip 55 years ago have said they have no interest in reclaiming the land but it must be used for public purposes as intended.

Twenty-one people claim to own the land.

In affidavits in the Environment and Lands Court in Busia, Emmanuel Ouma, Meshack Kiso and Shadrack Nderema said their father Eria Osudo donated the land for free. They said they have never encroached on the land or sold it.

Their affidavits are part of a petition by activist Okiya Omtatah seeking to nullify the title deeds in the names of 21 people who claim to own the airstrip land. The petition was filed on May 24.

“Since my father gave the land willingly to the government for a public purpose, we have no claims over it, apart from demanding it must used for the public," Ouma said in his affidavit.

He said  the land was fenced off as a restricted  area for use by the Kenya Aerodromes in 1965 but he learnt that some people had secretly demarcated the land into plots and titles were issued.

Kiso said in his affidavit  his father was only compensated for the cassava crop he had planted on the land he gave to the state for the airstrip.

He has also named the National Land Commission, the Kenya Airports Authority, Kenya Civil Aviation, the Attorney General, Inspector General of Police and Registrar of Lands in Busia as respondents.

Omtatah wants the court to make a declaration that any purported alienation, transfer or encumbrance of Busia Airstrip land to the 21 respondents, or to any other private entities, is unconstitutional, illegal, irregular, invalid, null and void.

The petitioner also wants a declaration the government should issue a title deed for Busia Airstrip land in favour of the Principal Secretary, Ministry of Finance, to hold the land in trust on behalf of the public.

Omtatah wants the court to issues a permanent injunction restraining the encroachers, their agents or representatives, or any persons claiming through them from interfering with the ownership or title of Busia Airstrip land.