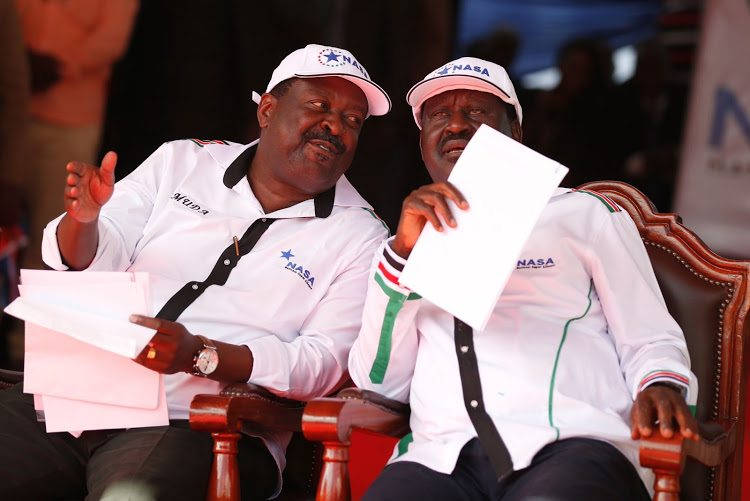 ODM is attempting to blackmail President Uhuru Kenyatta to support it's leader Raila Odinga's bid by threating to enter into an alliance with Deputy President William Ruto ahead of 2022, Amani National Congress party has claimed.

Party national chairman Kelvin Lunani said recent threats by top ODM leaders that the party was ready to work with Ruto and last week talks between governor Wycliffe Oparanya and the DP were clear signs ODM wants to badger the president into supporting Raila.

"Also self-evident is the party's duplicitous support for the handshake. It's apparent that ODM never believed in the BBI byproduct unless it serves their selfishness," he said in a statement.

The ODM party has lately warmed up to the idea of working with DP Ruto in what its senior members see as a revenge against "a potential betrayal".

Top ODM members have in the recent past accused some government functionaries of planning to sideline Raila from Uhuru's succession matrix by frustrating BBI.

Lunani said ODM was "creating external enemies" as a means to steady its tilting ship, adding that the party should be bold enough and own up to the reality that its ticket is reserved for Raila.

He said the confusion about the selection of a flag bearer for the party shows the party was engaged in shenanigans to hoodwink supporters and Kenyan's at large of existence of democracy within the party.

Lunani said ODM's oscillations over their presidential candidate shows a party in free fall self-doubt and in self-distract crisis and the party should own up to this.

"If this is not true why are they not going ahead with the two applicants who submitted their papers and instead want to extend the deadline to allow Raila to apply? Are they insinuating that Raila wasn't aware of the deadline?" he added.

Party director of elections Junet Mohammed last week said there were plans to convene the party's National Executive Council to make the final decision on the matter that has caused confusion among its supporters.

Junet said the party organ has powers to extend application deadline. Only Oparanya and his Mombasa counterpart Hassan Joho had applied by the March 31 deadline.

The party election board announced that Raila, Oparanya and Joho had submitted their application for the party flag bearer at the close of the March 31 deadline.

Party secretary general Edwin Sifuna announced that the former prime minister had not applied for the ticket and termed the communication, a prank for the April  fool's day.