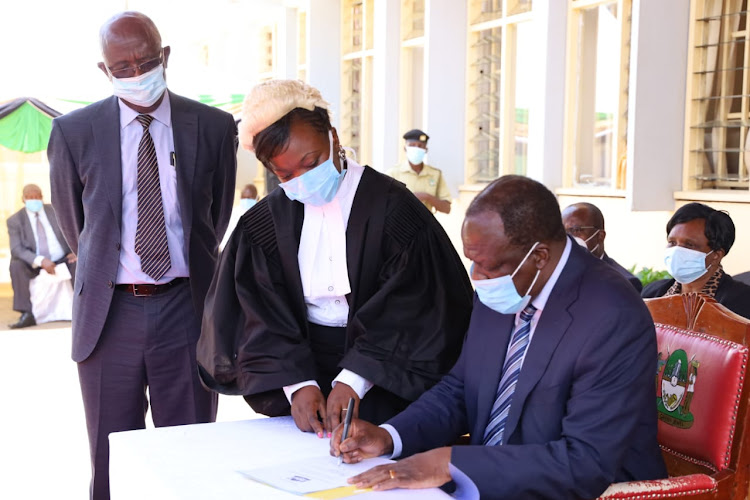 He said the framework will ensure counties access credit from financial institutions to fund capital projects.

Virtually all capital projects by county governments have stalled due to lack of funds, occasioned by the erratic disbursement of funds to regional governments by the Treasury.

Oparanya said Council of Governors had prepared the framework and presented it to the Treasury for approval but it was sitting on it.

"The framework defines mechanism through which counties can borrow up to 20 per cent of their total allocation to use the money to fill gaps occasioned by delay in release of funds," he said on the phone yesterday.

The governor said the framework authorises the Treasury to guarantee counties borrowing money from commercial banks for implementation of development projects.

He said most of the counties were unable to borrow money from financial institutions because of lack of a legal framework authorising them to do so. This, he said had adversely affected the development portfolios of counties.

He added that the borrowing framework was to help counties overcome such financial challenges.

"The initiative we have come up with is good for both counties and the Treasury as it will ensure sustainable cash flow to devolved units," he added.

Oparanya said the delay in disbursement of funds to counties has crippled operations of many devolved units.

He added that counties have not received funds from the Treasury for the last four months thereby subjecting them to financial crisis.

"In Kakamega, construction of the Sh6.2 billion Teaching and Referral hospital has stopped because of lack of funds, yet this was one of our mega projects," he added.

The governor noted that Covid-19 has adversely affected revenue collection by counties, adding that all the devolved units failed to meet their targets.