25-year-old beat 11 other contestants during the finals held at Hotel Itoya in Busia.

• Chief Judge Lilian Imbogo said besides catwalks, the judges looked into many issues including monitoring the candidates online and above all their character. 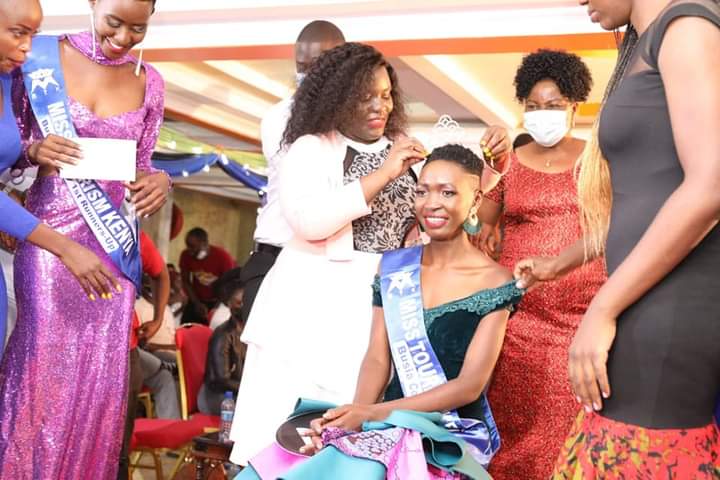 Chief Judge Lilian Imbogo said besides catwalks, the judges looked into many issues including monitoring the candidates online and above all their character.

She is the daughter of former Angorom MCA Solomon Onyango.

Evalyne Omoto, 22, from Teso North, a second-year student from Kaimosi Friends University pursuing a degree in Criminology, took the first runners up position.

Hassenye said she will endeavour to incorporate the ideas of all participants so as to have an impact in Busia County.

"The 2016 Miss Tourism Kenya champion, Leah Osca Otsula is my role model. I will be close to her to enable me to discharge my duties diligently.

Chief Officer ICT and Communication, Lydia Nabwire thanked the First Lady for patronizing the girls and Governor Sospeter Ojaamong for his goodwill in the event, urging the winners to be good ambassadors of the county.

Chief Officer Culture and Sports, Maurice Odundo said the auditions started in February 2020 but had to be postponed due to Covid-19, noting that one participant dropped out after becoming pregnant.

Chief Judge Ms Inbogo and, Busia First Lady, Judy Ojaamong and Director REEP raised a red flag on men who confuse the winners, thus tarnishing the name of the County.

"The 2019 incident was shameful and very shameful, it should not be allowed to resurface this time around," "Imbogo said, telling the girls not to let life leave them.