• The suspect was discovered to be Evans Wanda, a 24-year-old Ugandan who was riding on a motorbike with the gadgets when he was intercepted. 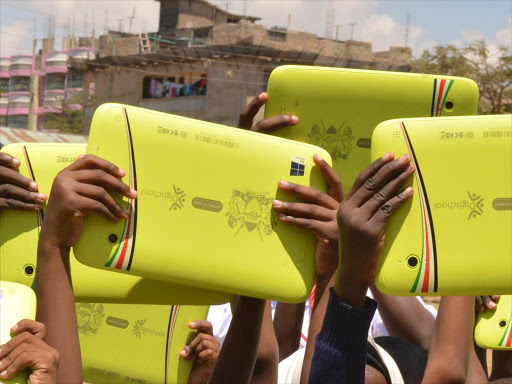 Some 71 electronic gadgets for the government’s school Digital Literacy Program that were stolen from a primary school in Teso, Busia County have been recovered in Uganda.

The gadgets were intercepted at an unofficial crossing border point by Ugandan police on Thursday and a suspect arrested.

The suspect was discovered to be Evans Wanda, a 24-year-old Ugandan who was riding on a motorbike with the gadgets when he was intercepted.

Upon recovery, the Ugandan police alerted their Kenyan counterparts in Bungoma who visited the Lwakhakha Police Station in Uganda and identified the branded gadgets.

It was later established they were stolen from Moding Primary school in Teso, Busia County.

A guard at the school had reported the gadgets were stolen at an unknown time on March 31 at the Moding police station.

The suspect had told police he bought the gadgets from a known contact in Bungoma Town but his narrative was countered by police.

Bungoma head of DCI Joseph Ondoro said the suspect was attempting to cross over to Uganda through an illegal route when he was arrested by Uganda police.

“He lied he got the gadgets from Nairobi but upon interrogation and investigations it was discovered they were stolen from a school in Teso,” he said.

Upon discussion with the Uganda Police, it was agreed that the suspect and the exhibits be detained at Lwakhakha Police Station in Uganda pending finalisation with Interpol and be handed over to Kenya on Saturday, April 3.

A team of detectives is investigating how the tablets were stolen from the school with the motive of getting more suspects.

The Jubilee Government had promised to give every class one pupil free laptops as part of the Digital Learning Programme (DLP).

The project took a slow start since many schools didn't meet the requirements to have the laptops in their facilities.