Pastor kills cobra in home of woman accused of witchcraft

Two days ago, residents of neighbouring Burangsi village set ablaze the body and casket of a 52-year-old woman who had been suspected of witchcraft. 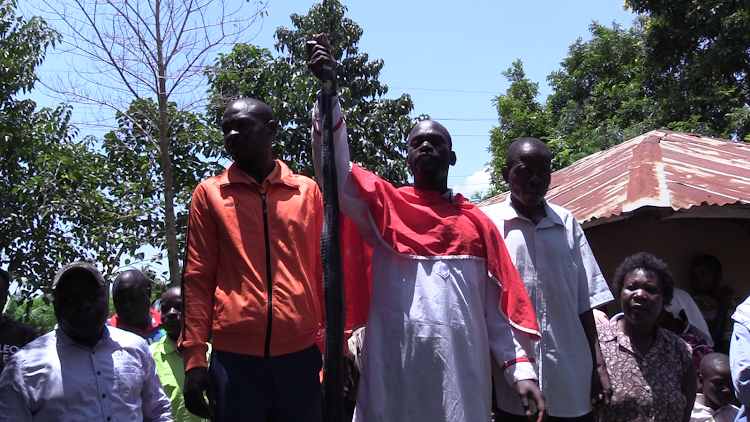 EXORCISED: Pastor Stephen Orata display the cobra he killed in the homestead of a woman accused of witchcraft in Bumula, Bungoma county on Wednesday September 18, 2019
Image: BRIAN OJAMAA

A huge black cobra was found and killed in the homestead of a woman accused of witchcraft much to the shock of Mungore villagers in Bumula, Bungoma county.

The villagers attacked the homestead and destroyed property, including the house.

The woman ran into hiding.

The killing of the snake came after residents who had complained of increased cases of witchcraft called a renowned exorcist to remove all witches in the area.

Orata is based in Busia from where he was called and given a month to do his magic. He received complaints from residents about the woman before storming the homestead with his prayer warriors.

"I arrived at this homestead with three of my prayer warriors and we managed to get out a huge snake in the vegetable farm at the back of her house," Orata said.

He said one prayer warrior was bitten by the woman's dog during the exorcism.

Orata said there were many other huge snakes used by witches in the area and promised to exorcise all of them.

"People in this area have suffered a lot and it is through God's power that we are going to set them free by dealing with witchcraft that has been the thorn in their flesh," he said.

The woman resisted the pastor and his crew from entering her house for prayer, Orata said. They forced their way in.

"It has become very scary to live in this village. Some people have even sold their land and migrated because of persistent witchcraft," Nangila said.

She said many school-going children had been forced to drop out due witchcraft.

"Even people who have risen in business or in their job have been bewitched and rendered useless. Some have become alcohol addicts," she said.

She said many families have been broken due to witchcraft.

Two days ago, residents of neighbouring Burangsi village set ablaze the body and casket of a 52-year-old woman who had been suspected of witchcraft.