Ruto tells off MPs over proposal to limit church contributions

• Ruto attended a church fundraiser organised by the African Divine Church on its 70th-anniversary in Hamisi subcounty. 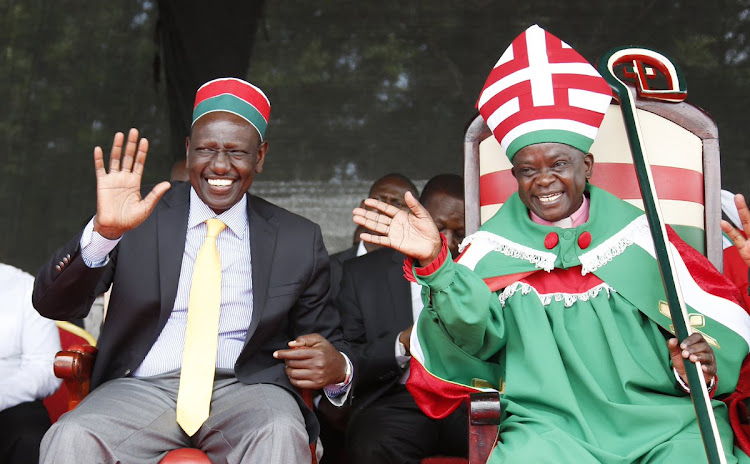 Deputy President William Ruto yesterday took his tour blitz to the backyard of ANC leader Musalia Mudavadi, who has also declared his interest in the 2022 presidential race.

Ruto attended a church fundraiser organised by the African Divine Church on its 70th-anniversary in Hamisi subcounty.

The DP criticised MPs over plans to make laws that will limit contribution to churches, saying such plans are supported by "backward politicians who have no vision and mission for this country".

DP Ruto told MPs to legislate laws that have value to Kenyans and to focus on national issues affecting the people. He added that most of the local churches depend on donations and internal fundraisers for them to support their activities.

The DP said the African Divine Churches need more support compared to other religions that have roots from abroad.

“Let’s not be a burden to work of God and as a nation let us learn the word of God first and the rest will come,” Ruto said.

The DP said the country needs responsible leaders with agendas that will make Kenya prosper.

“We are not part of lies as the Jubilee government and we need people to evaluate us on our merits not on propaganda as many are used to,” added DP.

Deputy President William Ruto has asked his critics to stop being envious of his generosity and pledged to continue giving harambee contributions, ...
Counties
6 years ago

Ruto said he has toured Vihiga county for more than five times and launched projects, including the road from Akala-Luanda, which he noted is complete, and now working on the Luaanda-Emusire-Ebukanga road, as well as streetlight in Serem-Shamakhokho and Cheptulu.

Akaranga urged the DP to continue supporting churches and even the mosques, saying giving to God is not a crime as the scriptures allow offerings.

“I was so present in mind when I declared going to Jubilee. DP Ruto has really supported our economy,” Khalwale said.

He added that he will not change his decision to ensure the Mulembe Nation gets to power. He added that the DP has every right to tour the region because as a national leader, he has to visit every corner of the country to supervise development.

Khalwale urged the people of Vihiga to walk and work with the DP to ensure they will be in government in 2022.

ADC Archbishop John Chabuga said those who condemn church donations have no values at heart.

He added that most people have been carried away by the "White religion".

“ADC churches are many but the national and the county governments have forgotten them despite the good work they are doing,” Chabuga said.

Fears of church divisions over harambees

Churches battle the 'devil' within but sharply divided over the fate of fundraisers.
Siasa
3 years ago
Post a comment
WATCH: The latest videos from the Star
by MARTIN OMBIMA OmbimaPatrick
Western
24 June 2019 - 05:00
Read The E-Paper