Mumias is publicly traded on NSE, so it falls under Capital Markets Act

• CMA chief executive says any decision to change directors of a company can only be made through shareholders' resolution at AGM.

• Agriculture CS tells Oparanya to suspend his task force, wait for its recommendations. 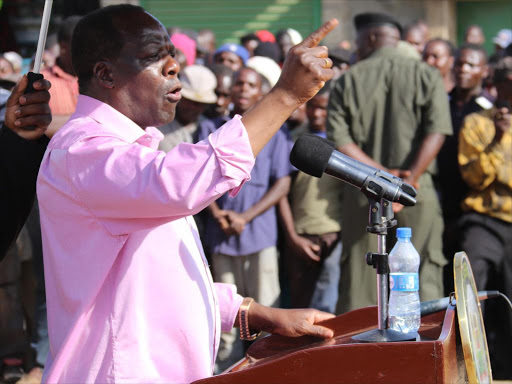 The Capital Markets Authority has warned Kakamega Governor Wycliffe Oparanya to be careful in trying to take over publicly traded  Mumias Sugar Company.

Muthaura said reports that the county intends to take over the company creates uncertainty in the stock market.

“We urge caution to ensure protection of the rule of law,” Muthaura said in a letter to the governor dated May 29. The letter is copied to National Treasury PS Kamau Thugge and MSC board chairman Ken Ngumbau.

Muthaura said any decision to change company directors can only be made through a resolution of shareholders passed in a properly constituted Annual General Meeting.

“Whereas the authority understands the concerns expressed for the county stakeholders that rely on MSC, it is important there is full adherence to the laws, specifically the Capital Markets Act,"  he said.

Muthaura also cited all other egulations with respect to any proposed takeover, change in control, the board or management or acquisition of company assets.

While addressing stakeholders meeting on May 18, Oparanya announced his government would take over the management of the miller.

He said the county government will deploy enforcement and police officers to guard the premises, adding that the takeover was meant to protect “secret sale of company assets” by the management.

But Muthaura said Mumias is listed on the Nairobi Securities Exchange, thus falling under the regulatory authority and governed by the Capital Markets Act and other regulations.

“The authority has noted media reports with effect from May 18 to date wherein the Kakamega government has expressed intention to take over management of Mumias Sugar Company through the constitution of a 12-member committee,” Muthaura said.

The CEO referred the county boss to the Capital Markets Act on takeovers and Mergers Regulations, 2002, which defines a takeover offer.

“Markedly a takeover scheme in respect of a listed company would involve the making of offers for acquisition by or on behalf of a person of all voting shares,  resulting in an offer for acquiring effective control," he said.

The company board in a paid advertisement said it continues to engage with stakeholders including farmers and the community in its turnaround plan for the miller.

“The board values and welcomes their input. Such engagements must, however, be within the applicable legal and regulatory framework considering the status of the company as publicly listed on the NSE,” board chairman Ken Ngumbau said.

Oparanya met Agriculture CS Mwangi Kiunjuri and the company board in Nairobi on Monday but the meeting failed to come up with a way forward to revive Mumias.

Says team composed of persons with no knowledge of sugar affairs.
News
3 years ago

"The meeting could not achieve anything tangible considering that what the governor is demanding is not backed by any law. He was instead complaining acting MD Isaac Sheunda abused him and must be sacked,” a source privy to the meeting told the Star.

“The CS asked Oparanya to suspend his task force on the revival of Mumias and wait for the recommendations of the sugar task force,” the source said.