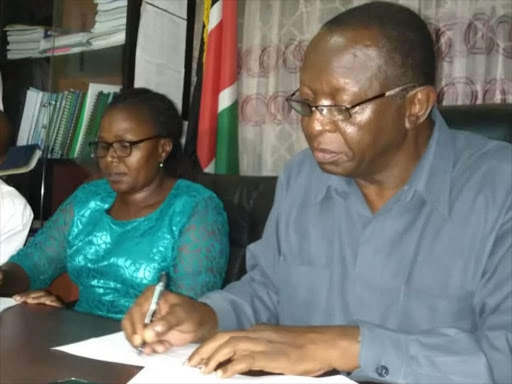 Busia Deputy Governor Moses Mulomi signing the return to work formula with the officials of the Kenya National Union of Nurse/ JANE CHEROTICH.

More than 500 Busia nurses have suspended their strike to give ongoing reconciliation talks a chance.

The move to call off the strike that started on February 18 was reached on Friday evening.

The suspension followed promising talks between the nurses’ union officials and the county government led by Deputy Governor Moses Mulomi.

Addressing the press after over four hours of intense negotiations at the Health offices, Mulomi said the county has started issuing promotion letters, a process that will be concluded on April 4.

The deputy governor is also the acting Health executive.

“The list of Economic Stimulus Program staff absorbed by my government will be submitted to the national government for payment of their gratuity,” he said.

The county agreed to establish an office of director of nursing by following procedures the service scheme of nurses.

Mulomi said no nurses will be victimised for participating in the strike, adding that the union had agreed to suspend the strike from February 25 to April 20, as ordered by the court.

“It is is open to further discussions with the union officials and does not subscribe to disruption of normal health services.” Kenya National Union of Nurses Busia chairman Isaiah Omondi praised Governor Sospeter Ojaamong’s administration for exhibiting “top-class sportsmanship” that led them to call off the strike.

“We praise the county for giving us an open door to their log,” he said.

They have agreed on various issues including in-house matters which will be discussed in camera.

Post a comment
WATCH: The latest videos from the Star
by By JANE CHEROTICH @chepjayne5
Western
25 February 2019 - 00:00
Read The E-Paper