MP wants terrorists burnt in public to deter their attacks 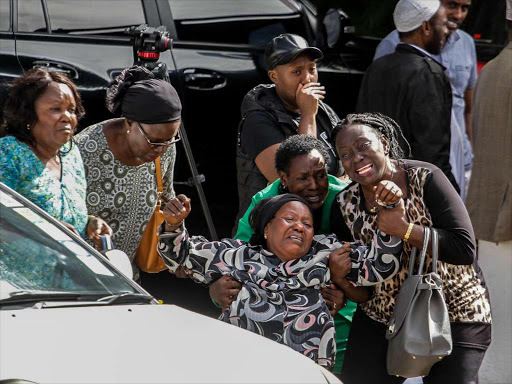 Relatives weep after identifying their loved ones at Chiromo Mortuary on January 16, 2019. /ENOS TECHE

A Member of Parliament has called on the government to come up with a law that allows for the burning of terrorists in public — dead or alive.

Savula said the country must find a solution to the senseless killing of innocent citizens.

He was reacting to the DusitD2 hotel attack in which terrorists killed 21 people on Tuesday. Many others were injured.

Kenya Red Cross on Wednesday said 50 people were missing even after the 19-hour siege.

A similarly executed attack on September 21, 2013 at Westgate Shopping Mall left 67 people dead and many others injured.

Savula said Kenya must remain unbowed and do more to tackle terror. He urged Parliament to allow more KDF soldiers to be sent to Somalia and, along other Amisom forces, crush the al-Shabaab terrorists.

“The rate at which terrorists are striking Kenya, killing innocent Kenyans and destroying property is alarming and every citizen must play their part to ensure the safety of all,” he said.

He condoled with the families that lost their loved ones in the attack and wished “quick recovery to those receiving treatment in various hospitals.”

Savula praised the international community for standing with Kenyans during the attack. The security agencies displayed professionalism in the manner they executed their job compared to the past, he said.

The MP said law enforcement agencies should be properly equipped and remunerated to discharge their mandate effectively.

On Wednesday, President Uhuru Kenyatta warned the financiers and planners of terror attacks that their days are numbered. The President said the government will relentlessly pursue and punish them.

He was addressing the nation following the DusitD2 terrorist attack.

“The security operation at Dusit is over and all terrorists have been eliminated,” the President said after chairing the National Security Council meeting.

“We’ll seek out every person that was involved in the funding, planning and execution of this heinous act. We’re a country governed by laws, rules and regulations, a country that embraces peaceful coexistence. We are also a nation that never forgets those who hurt our children.”

The President called on all Kenyans to report suspicious activities to prevent further loss of lives.

“We secure our families, communities and our nations by building a seamless partnership. We should not allow these people any shelter among us. I urge you to inform the police or any authority of suspicious individual or actions that you may notice in your day-to-day lives,” he said.

Opposition chiefs Raila Odinga and Kalonzo Musyoka urged Kenyans to stand together. The two addressed journalists at a joint briefing at Capitol Hill on Wednesday. They appealed to the public to be steadfast and resilient in the anti-terror war.

“Our goal must remain the ability to completely keep these forces of evil out of our borders and weed them entirely out of our midst. As a nation, we must reject division of all sorts — religious, ethnic, regional or even political,” Raila said.

“The terrorists who attacked us this past day did not seek to know the tribes, religion, party affiliation or region of origin of the victims.”