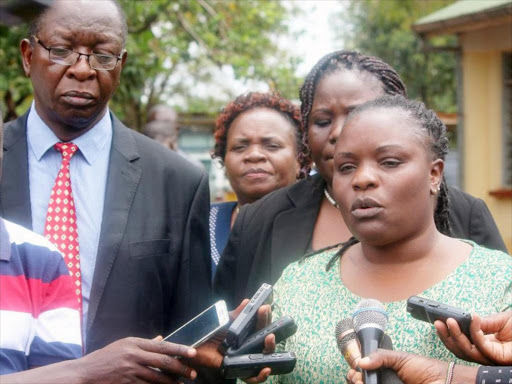 have urged residents to take the lead in guarding the environment.

Judy Ojaamong, who is the wife of Governor Sospeter Ojamoon, and chief officer for education Lydia Nabwire joined youthns in cleaning and tree-planting on Saturday.

Put garbage in bins and don’t throw it everywhere, residents were told.

“It’s bad practice to litter the town with garbage and later blame the county government. Cleanliness starts with us to ensure garbage is placed in designated places for better working environment,” they said.

They defended the Garbage Bill, which is being drafted by the executive, saying the punitive measures will deter people from throwing litter anywhere.

litter on the roads or in trenches instead of the designated receptacles.

Ubuntu Rave sponsor Edwin Owiti told residents to avoid blame game and take care of the environment instead of heaping blame on the county Government.

“I condemn that false notion. If the county should be taking care of the environment, who are these people who are littering this environment, it’s us.

It’s a challenge on our side; let’s not put a lot of propaganda and politics on it. Even at your own home you can’t be throwing litter aimless, but you put them in dustbins,” he said.

However, Owiti urged the county government to put dustbins in strategic places so that people can put the litter in the right place, adding that they will push for the enactment of the Bill and its regulations.

Ubuntu Rave Artistic Director and co-founder Henry Okumu said Ubuntu means coming together in unity, brotherhood, a way of showing love and caring for one another.

He said tree planting will start in March 2019 with a target of 50 million trees by December 2020. Ubuntu Rave Kenya is celebraring African diversity in fashion, film, culture, music, dance and above all to bring people together. The celebrations have brought dancers from Rwanda and youths from Burundi, Uganda and other East African Community Member states.

Post a comment
WATCH: The latest videos from the Star
by By JANE CHEROTICH @chepjayne5
Western
17 December 2018 - 00:00
Read The E-Paper